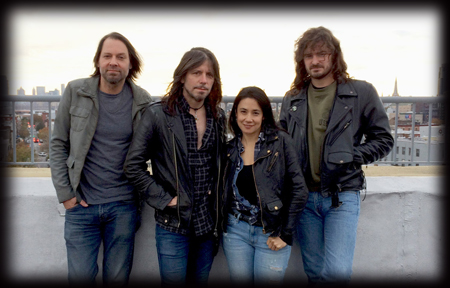 TANITH is a four piece band based in Brooklyn NY including members from Brooklyn and Newcastle, England. With two lead singers and twin guitars we play old school Heavy Rock influenced by the sounds and imagery of 1970s icons such as BLUE ÖYSTER CULT, WISHBONE ASH and URIAH HEEP.

Of course SATAN brought me here (pun intended). Yeah, the name of Russ Tippins compelled me to buy TANITH's two song 7" vinyl and I was amazed. Yes, the up-tempo and catchy “Citadel” gave me some NWOBHM goosebumps. And to top this with some female vocals and 70s inspired melodic layers made the deal sweeter. The guitar solo is complicated enough to grant a 70s Progressive atmosphere before putting the pedal to the Metal increasing the bpms towards to an epic ending. “Eleven Years” goes old-school and aside BLUE ÖYSTER CULT aura I could not stop but thinking SOCRATES as reference points and those two band-mentions showcase the depth in the TANITH's songwriting. Can two songs be enough to get one excited? Oh hell they are and I am already on the look-out for the full length debut.