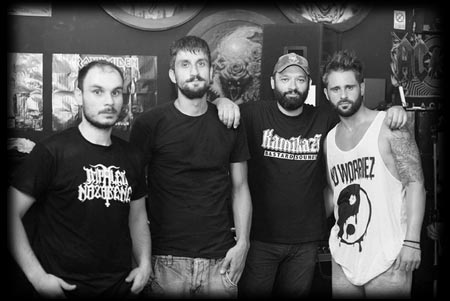 KEMEROV are from Serres, Greece and they are the brainchild of two guys (Matt & Giorgos) that grew up with ‘90s old-school Death Metal and BLACK SABBATH beliefs, but they could never really choose between the Metal sound and the Rock n’ Roll feeling. Giving in to these schizophrenical tendencies, and inspired by bands like ENTOMBED, CATHEDRAL and TURBONEGRO (among others), they decided to put everything in the mix. They started off in 2013 with guitar, voice and occasionally bass and drums, as finding skilled and reliable musicians is not the easiest thing, especially in a small Greek city. They didn’t give up though, they kept writing music and rehearsing with the help of temporary drummers and bass players. In the autumn of 2014, Tasos joined the band in drums and, some months later, his brother Spiros took on the bass duties. This was the first ever full KEMEROV line-up which still lasts to this day. From then on, everything took its course. KEMEROV self-released their self-titled 4-track EP in November 2015, which received positive reviews from all over the world. They didn’t stop there; they never missed an opportunity to play live, and so far they have supported historic bands like ROTTING CHRIST, SEPTICFLESH and JUCIFER with great success.

I think the label 'Death 'n' Roll' captures very good the sound of Greece's KEMEROV; this is basically a powerful mix of Stoner and Punk with lots of attitude and nice grooves. The harsh vocals, the hard hittin' bass lines and the MOTÖRHEAD-esque Rock 'n' Roll guitars are the main elements of the song “Slay Your Son” that is the only original recording on the single with the same title. The other two songs featured here are two covers, on SICKS DAZE's “The Better Man” and on TURBONEGRO's “Denim Demon” which I believe sum up KEMEROV's strongest sources of influence. The Punk and in-your-face attitude of the Greeks is the high-octane fuel keeping the energy of “Slay Your Son” are the sweaty level you should be looking for live concerts, especially if you want to blow some steam off. The guitar leads and solid rhythms showcase the tight songwriting of KEMEROV who I think are willingly to go beyond the Stoner sound which may fool the first time listener. The band is ready to release the first full length album and based on the so far released music, things look extremely promising. Check them out.