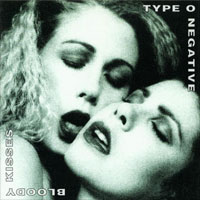 One year has almost passed  (from April the 14th) since the baronial 4-string ‘monster’ and the rich bass-baritone voice of Peter Steele was hushed forever, leaving the atmospheric Metal scene more poor and deficient than ever. METAL KAOZ decided to pick “Bloody Kisses” (or the beginning of the ‘bad seed’ TYPE O NEGATIVE spread 17 years ago), as a tiny tribute to this complex personality that marked the modern music history, affecting and changing the gothic Metal sound of nowadays for good. Nothing was the same after the release of this album (and not only for the band), after all.

Needless to say how I personally miss Steele’s lofty figure from the music industry. I remember when I first listened to “Bloody Kisses” (the original release and not the digipak one) and, suddenly, I went under his melancholic prurience thanks to his characteristic voice and his unbelievable ability to feel in depth the depressive/romantic TYPE O lyrics. His reading in songs like “Christian Woman” or the album’s divinatory self-titled track “Bloody Kisses (A Death In The Family)” is beyond words and I’m sure that you understand my saying (I can’t imagine that some of you haven’t listened to this album yet). The most successful single from “Bloody Kisses” though was “Black No. 1 (Little Miss Scare-All)”, which poked fun at the gothic subculture stereotypes (notice the sounds of the falling rain, the tolling bells and the ‘Nosferatu’ organ in the intro), while the song video that you can view below, received a positive reaction from the media, back in the middle of the 90s. I have also to admit that Peter Steele left his fadeless trademark on the band’s heavy bass sound with tracks like “Too Late: Frozen” and the cover on SEALS AND CROFTS’ “Summer Breeze”, a recipe that TYPE O NEGATIVE kept on following in every album from then and on.

Kenny Hickey, Josh Silver and Sal Abruscato were Peter’s ‘partners in crime’ and the rest members of ‘The Real Adams Family’ while are equally responsible for “Bloody Kisses” enormous success. The guitars were very slow and melodic, with a few solos and leading parts, while the tremendous bass is the bulk of the heaviness and the album’s majesty in every corner of every song. The keyboards colorize every depressive, heavy tune with beauty and atmospheric melancholy, lushing with any chance given and Josh proves that really knows what he’s doing, mixing gothic and organ sounds in the right proportions. But the thing I should not forget to mention is the job done by Sal on drums, marking for good TYPE O NEGATIVE’s sound, thanks to the creativity and the brilliant timing. Putting all these elements together, someone can easily realize why “Bloody Kisses” is considered as the most atmospheric album the band ever made, and also one of the most drugged out recordings, as the history tells us in interviews and various statements of those days.

I still close my eyes at night, listening to Pete’s heavy, damned breathing between “Black No. 1” lyrics, and his exquisite, soulful French accent in “Blood & Fire” exhaling jasmine and white lily scents, I keep on dreaming of his bitter, snow-white, vampyric smile and I almost can reach his tormented bipolar soul with my fingertips.