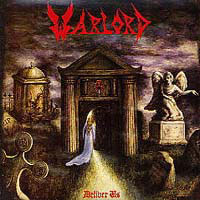 Is WARLORD’s career a gloomy story? Yes, it surely is. We all metalheads often chat between us for this or that band that had all the potential to make it to the Metal top but sadly did not ever caught the attention - don’t even talk about sales - it deserved. You name your hidden gem and the list is endless. Still, regarding the 80s US Metal field I do not think someone could argue WARLORD is the perfect example of an act capable of topping the Metal world but finally being choked to the ‘underground’ river…

“Deliver Us” - officially released in April 1983 through Brian Slagel’s breakthrough label Metal Blade Records - contains six songs (the Japanese edition on Watanabe Music/FEMS adds on more cut called “Mrs Victoria” - “Lucifer's Hammer” and “Mrs. Victoria” had already appeared on the Metal Massacre “II” and “III” series) and rare are the times you can say a 6-track EP can shine like a diamond from start to finish. All compositions are in the highest level with endless dozes of melodies, lyricism and a fantasy/epic coat you can hardly ever meet in any other band in the Metal field. The legacy of RAINBOW, RUSH, JETHRO TULL along with similar proto-Metal obscure American music (DUST, WINTERHAWK, ASHBURY) and the dark/epic side of the NWOBHM magic result in a set of songs destined to hunt the American Metal aficionado for many many years. No rough power, no fat volume and no shrieking vocals are present here (the production is quite pale indeed, with the bass sound nearly audible), but the result is absolutely ‘fantasy Metal’ the American way.

Co-founders Bill Tsamis (guitars) and drummer Mark Zonder (drums) probably had a vision merging - apart from what has already been said - the renaissance/medieval aura of classical music with progressive elements from the 70s under a metallic umbrella. Tsamis - with Greek roots - expressed a unique guitar playing style with high-pitch tremble soloing and some non-usual riffs being harmony themes themselves the time that Zonder’s drumming had an equal eerie style far distanced from any known pattern at the time in the Hard Rock/Metal category; you simply did not know which drum or cymbal he’d hit next. The basis for WARLORD’s music in this and every other (hmm…one more, this means…) WARLORD release was this splendid duo, no questions asked.

Still, the vocals became another ace for the album’s quality. Jack Rucker (aka Damien King I) was the singer that came out of nowhere to fill some this awesome songs with his majestic, melodic, traveling, epic voice. He does not hit sky-high notes but mainly focuses on giving each word the emphasis needed to trap the listener into the music’s magic. With lyrics that fantasize non-daily human concepts but rather focus in other times and places, “Deliver Us” builds an atmosphere that can definitely take you away. Los Angeles was celebrating the Glam/HardRock genesis the time that songs like… all of them…  portrayed a band coming to baptize what bands like e.g. CRIMSON GLORY, QUEENSRYCHE, FATES WARNING and LEATHAL would epitomize in the next years. If someone could say that melodic Power Metal was the brainchild in Tsamis’ and Zonder’s mind I’d not argue, to say the least…

Carrying on for a couple of years with the release of the “...And the Cannons of Destruction Have Begun” VHS/LP soundtrack, WARLORD parted ways with history. Tsamis went on to build his own solo project called LORDIAN GUARD in the 90s (having his wife singing) while Zonder achieved commercial success with fellow American prog/melodic metallers FATES WARNING, while also occupying himself with other bands/projects too (from CANS to recently TEN). A 2002 comeback album featuring HAMMERFALL singer Joacim Hans tugged the heartstrings of traditional Metal fans but was not something that majestic in general, and then there was silence. This does not of course omit anything from the myth WARLORD built with this perfect EP, cause “Deliver Us” sincerely sounds perfect in every aspect.

If you’re into melodic 80s Metal or American 80s Metal in general and have not listened to this album then you’re definitely missing on glorious piece of Metal history. Even if the band did not make it to bigger crowds, it won’t be difficult to witness yourselves what this band offered to the growth of melody inside the metallic savagery. Having to pack ten LPs six feet under for the future generations to dig out in e.g. a hundred years ago, “Deliver Us” would probably be included.