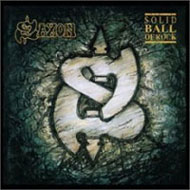 It is really hard to believe that SAXON had gone through a tough period. It seems that the British steamroller drove on a slippery road after the very good “Crusader” that was released back in 1984. By then, the band had conquered Europe and it seemed the right time time to reach the difficult market of the US. This attempt led the band to sign with EMI and try to alter the music writing recipe and approach the US sound. The result was a little disappointing for SAXON’s standards and profile that can be tracked down to the three albums that followed; “Inocense Is No Excuse”, “Rock The Nations” and “Destiny”. Don’t get me wrong here, since I do feel these albums have great songs like the amazing “Broken Heroes”, the hard hitting “Battle Cry” or the club-hit cover of “Ride Like The Wind” but something was missing...

I still remember the day I listened to the song entitled “Solid Ball Of Rock” being introduced as SAXON’s return. Being young and totally biased by what I was reading in the Metal magazines I rarely got on my hands (the week allowance was an unknown word to me) I immediately thought that this could not be right. But, Biff’s trademark whistle, Quinn’s amazing guitar work and Carter’s (the new bass player) signature bass doodle caught me off guard and I found myself looking for more. In fact Carter offered a lot in this album during the composing process and in the band’s overall sound with his bass playing skills that are all over the place. It is not a wonder that this guy is still upon the SAXON machine!

And then the final blow came and shattered all the doubts that I had for SAXON. The hair-rising keyboard intro and the classic guitar chords of "Requiem (We Will Remember)" introduced the emotional lyrics paying tribute to all the musicians that have paid the Rock ‘n’ Roll dues and are now longer among us. Biff's voice sounds amazing and I am sure there is not a single metalhead out there who does not feel her/his heart exploding with the lyrics reading “From London to Chicago, from the mountains to the sea the legacy you left will never die”.

The album is really packed with song meant to be played live; “I Just Can't Get Enough”, “Lights In The Sky” or the killer groove in “Ain't Gonna Take It” are some examples of the raw power SAXON were able to deliver a few albums behind. Yeah, this is a most important album in SAXON story since it marks the day they took back the steering wheel from the hands that had nothing to do with the band’s true spirit and mentality. Also, this album managed to capture the band’s amazing onstage power with fast rhythm and sing along choruses. It is not of a big surprise that many songs from “Solid Ball Of Rock” have still a place in SAXON’s setlists.

Think a little, can you find an album that can be characterized something less than very good after the release of “Solid Ball Rock”? I am sure there is no one who can beat this challenge. Sometimes, strength is not about getting punches and not falling down; it is all about getting back on your feet after a blow. And SAXON did exactly that!