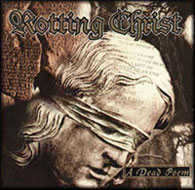 The reason I picked Greek metallers ROTTING CHRIST’s “A Dead Poem” for the next METAL KAOZ Monumentum is the band’s sonic evolution, leaving way behind their original sound  for more melodic, gothic-y and dark tunes that had the ‘cost’ for them the wrongfully accusing of ‘being commercial’ and ‘betraying’ their loyal black Metal fans. Personally speaking, I hate that term the die-hard fans give when they can not understand the artists’ need of moving away from the ordinary and experiment a little with the unknown and the risk of insecurity, as Tom ‘Warrior’ Fischer told me once. That’s exactly the temptation and the success in music after all: being ‘different’ and test your inspiration forces. And that what ROTTING CHRIST did 14 years ago (even though the evolution has begun with the previous “Triarchy Of The Lost Lovers”), giving them the blow and the strength to overcome the Greek borders.

“A Dead Poem” was produced at Woodhouse Studios in Hagen, Germany by Xy, programmer/percussionist for SAMAEL, who also contributed keyboards to some tracks and actually, it was the first album with an alternate logo, way to different from the past black Metal-ish font, a thing that persisted for the next two albums till “Genesis” where came back the original one; a fact that made so much fuss back then. The golden/ brown artwork with the pale statue having eyes closed with a cloth and the guest appearances of two grande names in the atmospheric Metal sound, helped a lot to demonstrate properly the ‘new’ ego of ROTTING CHRIST at the moment: rather measured tempo, many guitar melodies, quite melancholic and dark atmosphere thanks to the well-played keyboards that officiate with any chance given.

From the catchy and strong riff of “Sorrowfull Farewell” that opens the album till the highlighted “Among Two Storms” thanks to Ribeiro’s guest vocal appearance, the energetic rhythm tunes of “Full Colour Is The Night” having that NIGHTFALL-esque scent and the storm-guitar in “Out Of Spirits”, you’ll find plenty of emotional, tortured and spewing melancholy, combined with the maestric-played guitars and Sakis’ harsh vocals that fill up perfectly every song. After all these years that I’m still listening to this album I wonder why the hell they choose this name to title the album; I don’t think that the word ‘dead’ fits right to what this album reflects.

Without doubt, “A Dead Poem” is the most harmonically powerful ROTTING CHRIST album from my point of view that disturbed and cleaved in two the Greek Metal community back in those days and, definitely, a must have for fans of these Metal masters or anyone who enjoys a gothic-styled Metal album without a joint female vocalist, over dramatics, or with too much reliance on keyboards for atmosphere.