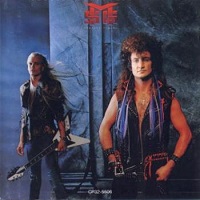 I remember browsing through the records in the local Radio Shack one day back in 1987 when MCAULEY SCHENKER GROUP's “Perfect Timing” showed up. I'd never heard of Michael Schenker at that point and knew even less about the record in general. But I couldn't take my eyes of the blonde guy with the guitar in the back of the picture while a friend commented that this was nothing to compare to BON JOVI, DEF LEPPARD or whatever poodle-band she had the hots for that week. (come on, we were 14...) I ended up buying the record anyway (most likely went back the next day and picked it up) and what I heard would change how I took on music forever.

The thing that struck me first was Mr Schenker's sense for melodies in the riffs and solos and his tone. I'd never heard anything like that before. Also Robin McAuley's voice, starting in “Gimme Your Love” already really sent shivers down my spine. Being a 14 year old girl it was the power-ballads in “Follow The Night” and “Time” that really got to me though and I'm pretty sure I wore out my LP on those tracks. I still hold the first of the two as one of the best songs ever released. The riff and the little chopped up vocal line are fantastic. The nerve and melancholy in Robin's voice is outstanding.

Moving forward I realized it wasn't a bad note on the record, all songs were absolutely fantastic. But there will always be favorites and up-tempo “Get Out” became one after a few spins. Again the melodies and Michael's playing was the things that got me hooked. After this I had to dig up everything Michael Schenker ever had released and got equally hooked on THE MICHAEL SCHENKER GROUP. Now, 30 years later he's still my guitar-hero and I follow closely what he's up to.

The “Perfect Timing” record has also stuck with me over the years and I still hold it as one of my all time favorites. I love the production and sound on the album. For sure, it sounds contemporary for the time it was released. But it is a good, clear and organic sound and it's possible to crank it up loud and it still sounds fantastic, as does Michael these days.