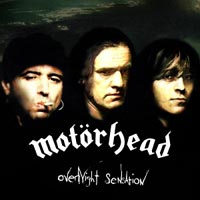 Looking at the 90s in general everything about Heavy Metal was dead for the major part of the decade but for some reason MOTÖRHEAD always managed to stay actual and fit in regardless the trend. Ok, even they struggled around the time of “March Or Die” was released… But the ones counting them out couldn’t be more wrong. So the skeptics stating MOTÖRHEAD had done their share in the music-world really missed their mark, the vitality in the band’s releases during the 90’s is fantastic straight through the series of records put out; from the fantastic “1916” to one of my absolute favorites “Snake Bite Love”. I remember coming home from the local record store with my copy of “Overnight Sensation” and cranking it up in the stereo and the speakers almost fell off the shelf where I’d put them when “Civil War” kicked off. DAMN!!! I had to listen to that song at least five more times before I could continue, what a powerful but yet super-catchy track. The title track might be mellower and rather bluesy but the drive is still there and it’s damn heavy. The same can be said about “Love Can't Buy You Money”, the stomp in that track is fantastic.

Also, this time I’d been waiting for this one, looking forward to this release. Before it’d been with my then boyfriend, but this was all mine to dig into and discover which make it very special. And of course that it’s not a bad track on it. Ok, perhaps “Eat Your Gun” and “Listen To Your Heart” are not my all-time favorite MOTÖRHEAD songs but they’re not bad. But “Crazy Like A Fox”, the album’s title track, “Broken” and “Them Not Me” have been and still are favorites.

It still strikes me today how powerful this record is, both when it comes to sound and performance. It feels like “Sacrifice” was a step towards this more brutal tracks but that they didn’t quite nail it on that record, here everything fell into place and made “Overnight Sensation” the complete run-over it is. MOTÖRHEAD’s classic catalogue, the releases before “1916” are highly acclaimed as well as a few of the 90’s ones. For me, the whole 90’s catalogue are just as good as the classics and should definitely get the same celebration as “Ace Of Spades” or “Orgasmatron”.

But what’s fascinating is that MOTÖRHEAD did manage to stay as actual as they’d ever been over the years. And frankly, when “Overnight Sensation” was released about 20 years ago, who would have thought Lemmy and his team would last almost another two decades? Still it felt so surreal reading the news after Christmas in 2015 seeing that he was gone forever. The Hard Rock world is definitely not the same anymore.