Solitude Aeturnus - Through The Darkest Hour 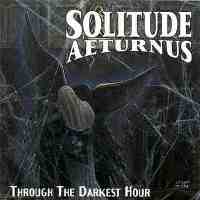 Some people say that the most original Metal band in the world is the godfathers, BLACK SABBATH. Hence, Doom Metal is the closest to being in the original form of Metal sub-genre. I have several doubts about this argument but this is not the right space for this. By all means, though, there are Doom Metal bands that perform excellent pieces of Heavy Metal music and one of them has been USA’s SOLITUDE AETURNUS. Fans of the genre have this band high on scale and worship all of their six releases from 1991 to 2006.

SOLITUDE AETURNUS was formed in 1987 as SOLITUDE but later changed the band-name. There’s no need to give you all the historical data since the Net is full of them; let’s just say that during the years of its existence the band recorded six albums that all of them received raving reviews from the Press and fans alike, and that’s no little thing for a Metal band in the 90s/00s periods.

“Through The Darkest Hour” can be considered as the band’s most balanced album. It’s doomy and melancholic but at the same time its powerful and bears some kind of lurking hope in its belly. The Texas doomsters play with the epic sound of soulmates CANDLEMASS too here, something that was not that obvious in the quintet’s first two releases back in the early 90s. The songs are the longest SOLITUDE AETURNUS had so far recorded, making the album clock to 57 minutes full of an epic, Doom atmosphere. Singer Robert Lowe has some mourning timbre that ties excellently with the music, especially in slower parts (meaning nearly the whole album, haha).

The production is really heavy and crystal clear, paving the way for some fascinating performance by the band. The sound is fat and all the instruments are upright in the mix. What’s left is the songs’ atmosphere and here lies the mastery of a band like SOLITUDE AETURNUS: you’ll kneel and pray when listening to all of the songs in this album, but especially the first side - as if we’re talking about a vinyl release - is simply majestic. Some fans call this album perfect and I can understand why; everything seems to be in place and even the lyrics are playing a major role being the backbone of the music.

“Through The Darkest Hour” shines as molten piece of epic, mourning Doom Metal music, needless to say. It’s a sad thing this US band is not here any longer - we still keep our fingers crossed for the future - but if you give this album a chance you’ll dive into the majestic kingdom of SOLITUDE AETURNUS and then the journey will have just started. Let aside the fact that this album was released at the peak of the Grunge movement; and they say that Metal music was dead by then... you losers...