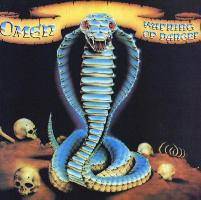 So, what can be said about this masterpiece of epic Heavy Metal? The album was released in the United States in late 1985 through the Metal Blade label and is long now regarded as one of the holy grails of US Metal. The Californian quartet had already shaken the Metal world with the release of the “Battle Cry” debut which was an aggressive high-octane effort showing OMEN ready to conquer the Metal map though it was a little bit immature for the time. Still, the band worked hard to improve their musicianship and in the meantime was trying to filter ever more their influences (mainly from IRON MAIDEN) so when “Warning Of Danger” came out it was time for the world to check out one of the pioneers for what was now going to be called Epic Metal.

As soon as the first notes of the same titled opus kicks in you know there’s no turning back. The galloping rhythm prepares you for battle while the vocals of J.D. Kimball (R.I.P. brother…) sound both commending and fierce; one of the best ever vocalists in the entire classic Metal scene, no questions asked. The song develops in a dreamy way and the leads/solos come from a band that is ready to show its teeth now at any cost. “March On” continues in a different wavelength with an obvious marching rhythm and the narrative vocals of Kimball hailing the metallic dignity of the Metal warriors around the world; a little diamond of music that’s one of the highlights in the disc. “Ruby Eyes (Of The Serpent)” is more melodic but doesn’t take something from the awesomeness of OMEN in terms of songwriting that can shake your brains, since it offers an astonishing piece of US Power Metal rarely seen in the scene till then. And then it’s time for “Don’t Fear The Night”, an anthem that confirms we’re talking about a colossal disc and band here, a song that is the epitome of epic Metal in all its dimensions with its galloping rhythm and unforgettable harmonies clad in the majestic voice of Kimball. Side A of the vinyl wraps up with the “V.B.P.” instrumental which is an interesting piece of non-vocal arrangement that proves OMEN can write powerful melodies as well; I can imagine this up-tempo tune having lead singing and this dream sends shivers down my spine…

Side B opens up with “Premonition”, another appealing cosmic instrumental tune - a short one this time - that actually acts like an intro; this leads us to the craziness and velocity of “Termination”, a Heavy/Speed Metal amalgamation proving that OMEN can write faster tunes without losing the epic profile resulting in a tornado of riffs and solos you cannot simply escape. “Make Me Your King” slows things down and is a return to the down tempo greatness of the band when it comes to writing headbanging tunes with epic vocals and a warlike atmospheres leaving no space for criticism. “Red Horizon” carries on from where the title-track had stopped with an up-tempo onward-to-battle breeze and showing no signs of wear but only a cruelty and malice not seen in the rest of the tracklist. Wrapping up the album, “Hell’s Gates” can act as a ballad but shows class and an ostentatious feeling with the vocals again dominating the air. What a great finale in any way.

Many US Metal fans can declare that the excellent “Battle Cry” 1984 debut is the American band’s best offering to date; still, I place my personal bet on this LP since it’s more well-crafted and has a few more dimensions to sink your teeth into. “Warning Of Danger” surely has the epic feeling OMEN would know be credited for in the sands of time but also boats a sense of polemic melody and atmosphere few bands (not even MANOWAR, haha…) would deliver from now on in the worldwide classic Metal scene. With a simplified guitar-meets-bass-meets-drums balanced instrumentation and an ace in the vocals sector, “Warning Of Danger” is probably the mere reason why 80s Metal will always be remembered and quoted when it comes to sheer metallic attack but also neat emotion and honest songwriting. The band goes on till today with Kenny Powell as the only original member I think and there already are rumors stating that in year 2015 they will be performing the entire album live onstage around the US and Europe. Well, I really can’t wait!