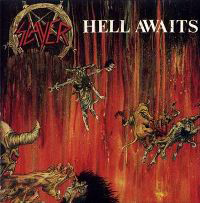 There was a time – long ago or not – that Thrash ruled the world. Be it the British standards set by VENOM, the explicit musical burst of tons of bands from the Bay Area, San Francisco region (METALLICA, EXODUS etc) or the German assaults by the holy triangle of SODOM, DESTRUCTION and KREATOR, these extreme (back then) sub-genre served the hunger of countless Metal fans who wanted something more aggressive, blasphemous and nonconforming. Keep in mind that we’re talking about the early days (1981 - 1985) with the genesis of Thrash and the initial spawn thrown for this ugly baby to rise and eat the globe in the years that followed. And somewhere over there we were introduced to SLAYER…

When the band was formed – circa 1981 – it was the influence of both IRON MAIDEN and JUDAS PRIEST aligned with the dirty attitude of Punk that led the Californian quartet to record their “Show No Mercy” and enjoy some first commercial success in the Thrash ranks. Still, what was just a proposal in this 1983 debut would escalate to a real doze of profanity in the next studio album, “Hell Awaits”. Staring at the American side of things, it was SLAYER that started flirting with Satan, hell, killing and other immortal lyrics subjects that countless outfits followed up in the years to come.

Ok, why is not “Reign In Blood” featured in this mag section, you may ask…Well, I think that every band and fan shall agree that while the 1986 LP is a milestone and probably the best Thrash album ever recorded, its predecessor still has this violent and malevolent character that cannot be matched. From the opening screams of the same-titled track to the ending notes of “Hardening Of The Arteries”, this 1985 album has everything you ought to have if you want to imagine how hell shall look like. The lyrics are extreme, violent and sick while the music is equally offensive and extreme in its own way. The morbid solos by Jeff (R.I.P.) and Kerry leave no space for hopeful thoughts while the voice of Tom Araya is the perfect companion to your trip downtown Hades.

In something more than 37 minutes it’s the metallic nausea you should fear if newly introduced to the kingdom of SLAYER when it was a really extreme band; meaning back in the 80s. “Hell Awaits” is the perfect soundtrack for entering hell without mercy and the original members over here – what an intense drumming by Lombardo…again… - wish you a pleasant stay. Needless to say, most of the bands playing evil Thrash/Death Metal have this album as the Holy Grail in their collection, and that’s not something that occurs every day.