French Sleaze Rockers BLACKRAIN released a new live video for the song “Blast Me Up”. Check it out below. The song is taken from the new studio album “Dying Breed”.

Formed in 2006 in French Alpen, BLACKRAIN has stopped to count the number of gigs in France, Europe and all over the world, as headliners or supporting Alice Cooper, Scorpions, Europe, Ugly Kid Joe… With 5 albums on the clock, the combo has just added a new chapter to its career, acclaimed by the press and the public.

After 2 albums produced by Jack Douglas (who discovered AEROSMITH and worked on solo album of John Lennon), our four dudes gathered one more time, with the same pleasure to make music together. But not any kind of music: a good old-fashioned Hard Rock with killer chorus then would love to listen today at the radio. As if the 80’s they have barely known had never stop to exist. Some people could think this music is outdated but today success of the revival culture in movies, series and music would prove they are wrong.

The most important is the public judgement and this new album called “Dying Breed” is the best commercial success of the band. Directly at #2 in the French Metal charts just after their grandad Alice Cooper, it’s the first time the rest of the world really welcome BLACKRAIN, the album has even succeeded in reaching #20 in the US Metal radio charts. Sweden Rock mag in Sweden, Rock Tribune mag in Belgium, Spark mag in theCzech Republic, Burrn mag in Japan, Fireworks mag in the UK and so on, the international press were praising “Dying Breed”. A German magazine even placed the album in their «”Big Four”, and we know how German people can be hard with French bands.

Composed and recorded in Sweden, the adopted country of Swan, the leader of the pack, this new album is a kind of reaction against the way the music goes. Tired by electro and RnB sounds, struck by the death of many of their idols, harassed by people who ask them why they still wear long hair, the 4 musicians more and more felt like a dying breed, “the last of their kind” as they shout in the first song of the disc played on the mainstage of ‘Hellfest’ for the first time in June 2019.

Chris Laney (CRASHDÏET, CRAZY LIXX, PRETTY MAIDS) was back as the producer on this album and this is a major point. He’s the one that produced “License To Thrill” in 2008, still considered a cult album of the revival of the Hard Rock scene in the late 2000’s. He’s the one that understands the best the sound of BLACKRAIN and it’s easy to hear it.

In the days to come, BLACKRAIN will be busy. It’s time to promote their brand-new album on stage and they will start to do it supporting their German friends from KISSIN’ DYNAMITE on a European tour in late October.

May
30 - UK-Lincoln - Call Of The Wild Festival 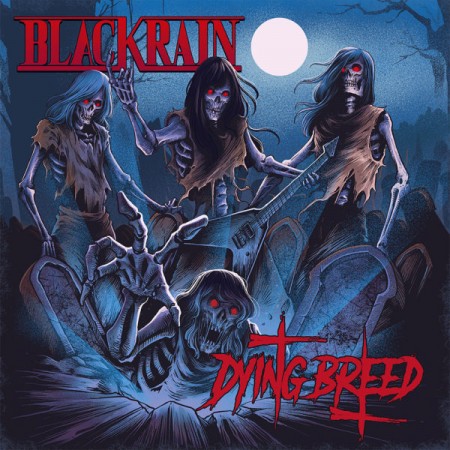