They never went away, but ELECTRIC FRANKENSTEIN is back celebrating the release of their 1999 masterpiece “How To Make A Monster”, with an all new re-issue vinyl release. Listen to the album and order the vinyl HERE. You can also stream the album  below.

In addition to limited edition colored vinyl, the remastered album includes new artwork by friend and famed artist COOP, extensive liner notes by Joel Gausten with additional insights by Eddie Spaghetti (SUPERSUCKERS), Tony Reflex (Adolescents), Ace Von Johnson (FASTER PUSSYCAT), plus Captain Sensible (THE DAMNED), a digital download and an 18” x 24” poster of COOP's “Electric Bride”. The vinyl comes in limited quantities of black/white/green mix and orange/yellow mix, and can be heard on all streaming platforms.

“The re-release of “How To Make A Monster” was very important to us and we worked hard to make it something special for our fans”, confides bass player Dan Canzonieri. “It's hard to believe this record is 20 years old! We are celebrating this release by performing the album live in its entirety for the very first time in Europe starting in July. Our US fans will be able to see us play the album later this year and we will post dates as soon as they are confirmed. This includes a round two return to Europe in the fall”.

Originally released in 1999, the album was the band's first for Victory Records. Self-produced by ELECTRIC FRANKENSTEIN, “How To Make A Monster” is a cesspool of 'high octane Punk Rock, a blazing jam of stylishly low-slung Rock and Roll with attitude to the max', as described by Metal Hammer. In addition to playing some of the most dynamic, ravenous, and menacing Rock you've ever heard, ELECTRIC FRANKENSTEIN recognizes the importance of integrity - from giving proper nods to the architects of street-level rock (IGGY AND THE STOOGES, AC/DC), to fiercely supporting indie labels, to their constant efforts to put fans first ahead of profit, and their non-stop mission of battering in-your-face rock to packed venues across the world.

“How To Make A Monster” tracklist 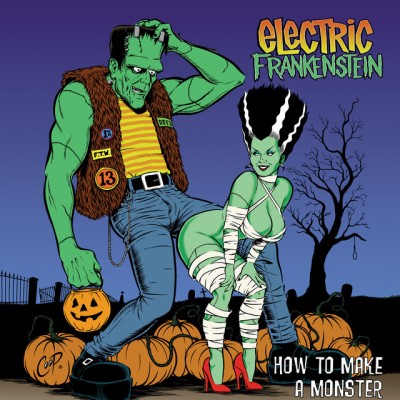