Dirty Deeds: My Life Outside AC/DC 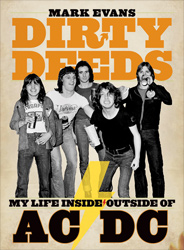 It is beyond doubt that Mark Evans was not the strongest wheel in the AC/DC wagon. No, I am not saying that his bass expertise was not enough for the Aussies’ music, but it felt always like an outsider. Maybe the Young brothers were emotionally tough to conquer or maybe it just did not fit. In anyway getting an autobiography from this bass player was more than interesting since he was with the band during the first days of AC/DC when everything was still on the making and the band was working hard to make a living and establish a name in the scene. Please keep in mind that back in those days the internet was an unknown word and getting your name out meant playing live and then playing live some more.

So, in his biography Mark gets the reader by the hand to trail his steps from his childhood in a Melbourne suburb up to becoming the bass player of an upcoming local band. His writing has many idioms and Aussie expressions that can make it difficult to understand during the first chapters. But this slowly fades away as the readers dives into the 70s environment feeling close to Mark’s narration as he describes his baby steps in music. Of course, the book becomes really interesting after his induction to AC/DC. In fact, the series of events that lead Mark to the Aussie band is really a great reading since he was a young bass player and AC/DC were just a local band, trying to make their name known playing in small pubs. The book has a nice collection of photos maintaining vintage aesthetics and, to tell you the truth, it gets a little bit emotional watching Bon Scott in his prime. I cannot help but to wonder how AC/DC would be if Bon was still walking the earth. I mean, his attitude, his provocative writing hand and his lifestyle were some of the elements that made this band great.

Part of my brain was expecting some dirty details about the Young antics but as I kept reading my way of thinking changed and enjoyed all the info about the recordings of the first and most historical albums. I don’t know if this was done intentionally but Mark presents his side of story without making assumptions and without saying shoulda, coulda, woulda that gets me so bored in musicians’ autobiographies. The band gets on the UK on a short tour and Mark’s storytelling follows all the onstage and offstage happenings (there are some very good stories there). Yeah, there is a strange atmosphere between Mark and Angus but again there are no gossip-like details and I really appreciate Mark for keeping this so tidy. He describes with vivid colors the day of this departure from the band and reading about that band meeting gives a taste of his disappointment when the news broke out. Everything is described through his personal thoughts and emotions, so once again this is a real autobiography and not a way to bend the story and accuse people who have no way to defend themselves.

I thought that the interest would decrease after Mark’s departure from AC/DC but I was absolutely wrong; while he describes how he returned to the stages to play live, Mark presents his family and things get really emotional when he tells the story of his daughter Kristin and her battle against a life threatening disease. The news of her overcoming this grave health issue are so rewarding and at the same time shocking since in moments like this one remembers to appreciate life. But real life stories have not always a happy ending, so reading how Mark lost his daughter in an accident after having battled that disease is ironic and heart shattering.

Indeed, I was partially disappointed for not getting more details about his relations to AC/DC members (I’d love to learn more stories about Bon), but getting so close to Mark’s painful loss I remembered that autobiographies are all about the person who writes them and nothing more. In any case, this is a recommended reading for all the AC/DC fans, especially for those (like myself) who didn’t have the chance to meet this band during the first days. You see, when “High Voltage” was released in Australia, I was not even born…

+Pros Smooth reading, presenting the early days of a most successful band in a down-to-earth way.

-Cons This is only for the die-hard AC/DC fans who might lose interested after Mark’s departure from the lineup.