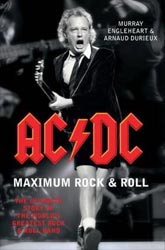 To write a book about a band that has long now been ruling the hardrockin’ world ain’t an easy task. Who you’re gonna interview? What kind of resources you should use? How accurate info can be when dating back to e.g. 40 years back? Still, Murray Engleheart and Arnaud Durieux did manage to come up with a comprehensive total material that shall left you far from felling bored when it comes to reading facts and so much detailed information in some 40 years of illustrious AC/DC career.

Let’s start with the bad stuff: the book has some less than 500 pages and is so thickly-printed you’ll probably have a bad time with these tiny letters. I admit I found myself enough times throwing it over because I got too tired of trying to read the lines themselves. Thankfully, with a plot being unveiled in a more user-friendly way at some time, reading went on really smoothly ending with a “thumbs up” recognition for what these two authors came up with finally. A second drawback can as well be the lack of added photo or memorabilia (posters, passes etc) material, something that every dedicated fan wants to have served when reading a biography. I do not know if there’s some license or any other kind of conflict but I have seen it in enough books I cane across the last years. Hey, we need photo stuff too; the eyes get rest a little bit in between reading and even if the Net can act as a resource for virtually everything the fan wants, it’s glorious and breathtaking to sum up rare photo stuff in a book (and not only in special sections in between chapters, but also aligned with the normal text; e.g. like Dave Mustaine’s book).

Now, on to the good news: “AC/DC: Maximum Rock & Roll” is as consistent, comprehensive, detailed and multi-layered as you should expect by an appropriate insight. The storyline is time-dependant and goes back to each of the early members’ childhood and first steps, while it is logically centered in the Young brotherhood as some kind of spine. The first part – long before the band recorded its first album – is so detailed and long you may find yourself feeling a little bit tired, but that’s the bonus of such a research if you like it called this way. The bands that offered members to AC/DC, Bon Scott’s parallel live prior to joining the band, the general Aussie Rock scene at the late 60s and early 70s…there’s so much to find out by reading the first ‘ealry years’ section; and not only AC/DC-related. Trust me...

With the plot rolling after the band’s first album, the reading gets somehow to being smoother. Tours, recordings, tough times, good times, money, managements, the guiding figure of Malcolm, the American breakthrough, the loss of Bon, the “Back In Black” phenomenon, the…the…the…Literally speaking, the book offers tons of information regarding what and who contributed to the birth, development and staying of this take-no-prisoners hardhittin’ Rock milestone outfit. There’s some hundreds of artists and music industry associates offering their own opinion and memories too and that’s a total addition to what else would have been a mere saying of events.

After having finished the reading of “AC/DC: Maximum Rock & Roll” I found myself feeling it’s really a long way to the top if you wanna Rock ‘n’ Roll. It was nothing else that difficult to put faith and persistence to what Malcolm and Angus envisioned in their teenagehood, while it needs no further explanation to just imagine how the death of the phenomenal Bon Scott weirdly resulted in the monumental success of the “Back In Black” album shortly afterwards. Fuzzy points in the band’s history are outlined and – to sum it up – this book is a great source if you wanna check out what it means to have unlimited hunger for Rock ‘n’ Roll music…and life; to the very top.

+Pros Tons of information and quotes is listed in this book. Approved!

-Cons Really hope some next edition is printed in a more user-friendly format.