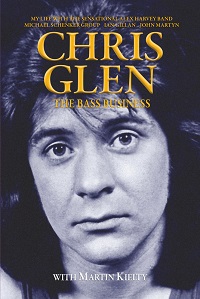 The first time I crossed paths with Chris Glen was I got the MICHAEL SCHENKER GROUP's second album simply titled “MSG”. As it was for a long time I didn't pay much attention at all to the magnificent rhythm section on this album. That came years later but it's never too late to change and better up, right?

When I saw an ad about this book flashing by on facebook I immediately started to dig after it (facebook does that, you see one post and then it's gone forever) and found it through a local dealer actually. A good thing as it becomes crazy these days with postage and other fee's becoming double or three times as much as the purchased price.

As almost always with biographies they get heavy to start with before the musician in question's career takes off. Yes, reading about Chris' early days wasn't the most fun and interesting part of the book. But it was a great build-up towards the real stories and with that setting the same solid foundation as Chris is as a musician. The amount of the background before his bands started to take off was just enough and focus is on his musical livelihood.

A major part of the book is about his days with the band THE SENSATIONAL ALEX HARVEY which seems to have been a real treat for the concert goers as many prominent musicians point out in the foreword, including Eric Singer of KISS and Rick Nielsen from CHEAP TRICK and John Corabi of THE DEAD DAISIES to mention a few. It is a very interesting reading and great teaser to check the band out. It also shows another sample of the music business. The management actually seemed to be a decent one under Bill Fehilly and worked in a good favor for the band. When tragedy struck and Bill together with the rest of his company was killed in a plane crash the story took another turn.

But it was for the MICHAEL SHCENKER GROUP part I really wanted to read the book. As always, there are too few details around writing and recording albums. I always want more. But it was great reading about the successful tours with MSG and some extravagant tour behaviors. It's crazy how much money that's been spinning in the music-business (and perhaps even sadder that there's hardly any left in it today). The book also introduced me to parts of Chris’ career I didn't know about, the session with Ian Gillan for the ‘Naked Thunder’ tour for example.

Running into Chris (not really; I chased him down outside the venue as he was getting into his car) after the show for ‘Michael Schenker Fest’ in Sheffield there were two things standing out of that short meeting. It was brief meeting but I could clearly see where all the positive words about Chris being a cheerful fella came from. That minute or so really got me into a good (even better) mood. Also, that he mentioned that the book intentionally had been kept short and not giving everything away and more was coming. Something that I really am looking forward to! I definitely want more of this.

+Pros Smart and funny writing, very entertaining and easy to read (when getting into the Scottish expressions).

-Cons It's way too short and it just scratches the surface on many topics. Good stories come within another story as an aside part instead of its own story.