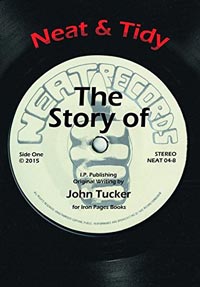 One would think that major cities like London, New York or Los Angeles would be the places where history is being written. But instead, what most people refer to as the foundation of Heavy Metal was mainly pushed out of a small town in the northern parts of England, Wallsend. Most metalheads should be familiar with Neat Records as this label housed the today’s major acts as VENOM, TYGERS OF PAN TANG, RAVEN and many more. Bands which really set their own standard on how Heavy Metal should sound, which wouldn’t have been possible without independent labels as Neat Records.

This book describes both the history of the music as well as tells the story of a guy, typical car salesman who saw some business in this new movement called NWOBHM (perhaps more the music business) and jumped on the train. You can say what you will about Dave Wood intentions with the label but fact is, without Neat Records the Heavy Metal scene would have looked different today. And to get to read the details about how the band worked and how they got connected to the Neat Label in the early 80’s is fantastic. The details given and space for the ones being on the ride, virtually covering every band ever released something on Neat, to tell their story. Not only about Neat Records but also the bands history is very interesting. Then to also see how the scene worked back in the days and how journalists from the major music magazines could (p)raise or destroy a band. But despite bad reviews for some (or most) bands released on the Neat label, the working-class’ attitude succeeded anything as many of the bands moved on to become big names in the scene. Something that still exists today, but of course, journalists doesn’t have the same power anymore.

Also to get the history of the acts which after releasing one single vanished into obscurity, bands that were never covered in the press today as they were never reformed is perhaps the most interesting part of the book. But also to read about the excitement the reunited bands feel today when brought back into the spotlight because of festivals as ‘Brofest’, ‘Keep It True’ and ‘Headbangers Open Air’. Reading about the bands struggling to make it 35 years ago also shows how little has changed for now. Bands still have the same problems and members switch from one band to the other. And it’s easy to get sentimental reading about it all just because this genre is a favorite and it always feels that the bands deserve so much more than they got. Perhaps not from Neat Records even if the focus seemed to have been to make money rather than to promote bands on occasion, but from the scene and media.

So this is definitely good reading for a true metalhead, even though it is about a narrow area and the level of detail is a bit overwhelming on occasion but it’s all very interesting and entertaining at the same time.

+Pros The level of detail almost goes down to a nerdy level, and it is absolutely fantastic reading. The book covers the story in its entirety.

-Cons The language is on some occasion messy, spoken word kind of text and quite hard to follow for one not having British English as first language.