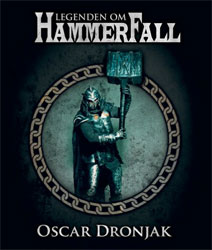 Since every band around releases biographies these days, I wasn’t too surprised to see one about HAMMERFALL in the shelf as I was strolling around downtown one day. And honestly, I never really thought I’d find a Heavy Metal biography book at the local supermarket (ICA). But it was there and I bought it for the simple reason it was way cheaper than online or in the local bookstore. And here’s the first contradiction; should you really be able to buy Heavy Metal books at ICA? But as Oscar Dronjak states on a few occasions in the book, “what’s so wrong with being folksy popular”?

Many metalheads have the tendency to stop following a band one it has become successful and has a big following and in the HAMMERFALL case I can’t say I’m better. I really enjoyed the first few HAMMERFALL albums and then it wasn’t as much as everybody else liked them, plus I found other bands I liked more from the same genre as I just turned my back on them because they gathered a big following. Still, one cannot deny that HAMMERFALL did a lot to bring back classic Heavy Metal in the spotlight a decade and a half ago.

The book goes further back in time than the beginning of the HAMMERFALL story. Since it is Oscar who’s the author, of course his background and history is included in a small part in the beginning, addressing his first attempts to get a band together, play gigs and describe the scene in general at the time. For me, that part was a huge nostalgia trip, even if I lived at the other end of the country - the bands, zines and general attitude were the same on my flank too. Of course, the gang around Oscar and his bands almost all reached fame a few years later and became bands as DARK TRANQUILLITY, IN FLAMES, AT THE GATES and the rest in the Gothenburg scene.

The book is very detailed and holds a lot of anecdotes from tours and recordings over the years. Sometimes funny and sometimes even a bit embarrassing for the ones involved, but of course really a lot of fun to read. The good thing is that the story addresses the first few years in detail and then tends to summarize the last decades in the last few chapters. In “The Legend Of HammerFall” every tour gets the same treatment, apart from the very last tour perhaps. But come to think of it, it normally is the first 10-15 years of a band’s career that is well documented and then everything becomes routine. It’s a bit like this in this book as well.

But it is a very well written book; the storyline is very good and Oscar shares a lot of his thoughts and beliefs as any band-leader would do. It’s easy to understand where the success comes from but it’s also easy to see that he has pissed off people just being himself over the years. Occasionally, he comes across as the nicest guy in the whole world and on others as a stubborn narrow-minded bastard who really doesn’t want to listen to anyone around him - at least when it comes to decisions around the future of HAMMERFALL. The story is actually what anyone who’s decided to play music for a living would do; and that is always keep in mind what’s the best for the band and never, ever compromise. And for that I cannot but admire Oscar; he and the rest of HAMMERFALL have actually managed to create a very successful band in a time it was bad to have an image and managed to keep that flame burning throughout the years. Taking from the 80s what they thought was impressive and did their own thing with it with stage sets, pyros and shows, with kind of a larger than life attitude. All this came from the passion for the music they are playing and nothing more. It’s very hard, as a Metal fan, to not respect that.

So with that being said, my view on HAMMERFALL changed drastically with this book. Even if they will ever be my favorite band, I see them with a whole new respect after reading this book. I haven’t found any information that this book is available in other languages than Swedish at the moment, but I sure hope it will be translated, since it’s well worth reading regardless if you’re a fan or not.

-Cons Can’t find anything at all, the level of detail is what I wish for in all biographies.