One Man Army And The Undead Quartet - Johan

The latest ONE MAN ARMY AND THE UNDEAD QUARTET album kicked my ass with its slightly different, more Death Metal may I say sound, and I just couldn’t miss the chance to interview the band’s frontman Johan Lindstrand, a living Death Metal legend! Here’s what he had to say about the band’s new album, the line up change and many more... 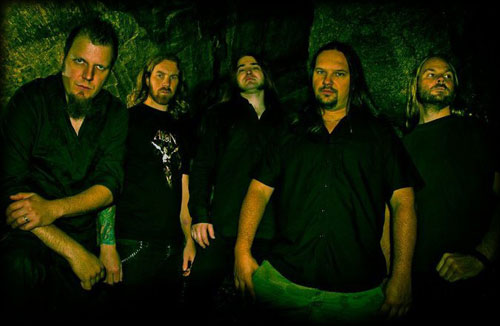 Hello Johan and thank you for taking the time for this interview. It is really an honor for me interviewing a man that has offered so much to the Metal scene. Let’s start with some basic stuff. Your new album with ONE MAN ARMY AND THE UNDEAD QUARTET is out. Are you satisfied with the result?

Hey, no problem! The pleasure is all mine. Well, I´m extremely satisfied with the new album. It came out exactly as we wanted. The sound is brutal, the songs are killer and it feels fresh and like it´s the birth of a new army.

“The Dark Epic” is one more album being released through Massacre Records. Are you satisfied with your cooperation with the German label? Are you planning to stay there for the release of your next album or have you thought about moving to another label?
We’re pretty satisfied but in the end we don´t really have a choice. The album is being licensed through Nuclear Blast and we still have a couple of options left, like 2-3 albums I guess. Nuclear Blast decided that it was for the best to release it on Massacre Records because they had problems to push us any further cause we were on the lower level of the label and they have a bunch of very big bands. Now on Massacre we are more on the top shelf and have a much higher profile so it has really gained the band to move to a smaller label.  I really don´t know what will happen on the next album. It´s a matter of sales.

Your new album presents a new guitarist, Jonas Blom. Why did Lagerblad leave the band and how did you end up choosing Blom as a replacement?
Lagerblad left cause he actually wasn’t supposed to be in a Death Metal outfit in the first place. He wrote some killer songs but I always knew that he wasn´t too comfortable with this thing. And then you can add some touring on that which kinda wore him out.  Now we have a guy that´s totally into the extreme. Robert knew about him before cause they lived in the same town.  This new guy Jonas Blom is very dedicated and he´s writing a lot of good material and that´s awesome since Lagerblad wrote 50% before he quit. We have a different approach now which I think suits this band more.

Talking about the line up change you went through, I noticed a slight difference in your sound. Is this because of Blom joining the band or was it something you were planning to do either way?
It’s mainly because he entered and Mikael left but we discussed our sound before making any decisions on the songs. We simple wanted to change some stuff. Make the sound more aggressive and epic. More interesting with less melodies but more twists to force the listener to stay alert. Everything from music to vocals is more brutal compared to the earlier work and this was intentional.

Is there a concept behind the lyrics of “The Dark Epic” or does every song stands individually?
No, there’s not a concept but there has been talks on doing that in the future. If we have a really cool and dark story to tell then we will definitely try to work something out.

I have to admit that “The Dark Epic” features a really interesting and beautifully macabre cover artwork that reminded me of many horror movies. Who designed it and how can someone relate it to the album’s title?
This artwork is definitely the coolest OMAATUQ artwork so far. So amazingly dark and beautiful. It was made by Bjoern from Killustrations. I had a few ideas when it comes to the colors and I was also inspired by some movie and game covers and we basically sent him these ideas along with the title. The artwork shows the grim reaper and the title fits perfectly to that. Death is around us every day. Life and death are the two most real things there is and you don´t know when the darkness will strike you down so you can say that it´s pretty epic.

Where was the album recorded and who handled the mixing and mastering? It surely has a heavy and raw – in a good sense – sound.
We recorded it in Black Lounge Studio once again but this time we wanted a bit more raw sound cause we think that the sound on “Grim Tales” was too good and too clean for a Death Metal album. The sound feels bigger and it´s almost like hearing it live if you turn up the volume. It´s definitely more real and not that much “fixed” compared to “Grim Tales” and this is something I love about the album. Not that sterile.

What are OMAATUQ’s plans for the time being?
We’re taking it pretty easy now but we´re hoping to get some live shows booked soon and then hopefully a tour in the fall.

Let’s get to some more personal questions now. Your old band THE CROWN reunited a couple of years back. To tell you the truth, I was kind of surprised to see you staying with POMATUM. I suppose you were asked to participate. What were the reasons that made you refuse to join THE CROWN?
I was asked to join them but in the end I said to myself that this wasn´t something I wanted to go back to. I did that for 13 years and when we broke up I got very frustrated so I started ONE MAN ARMY AND THE UNDEAD QUARTET, which has been within the circuit for 7 years now. This is my baby. I´ve started this on my own and I´m very proud of it. Sure, THE CROWN is much bigger and without that band there would never have been OMAATUQ but I really don´t care. I´m in OMAATUQ cause I think it´s fun and it gives me what I need music wise.

Except for THE CROWN and OMAATUQ, you had also taken part in IMPIOUS as a drummer. Why did you leave the band back then? How was your experience being behind the drum kit than the microphone?
I only helped them out until they could find a permanent drummer and I only played drums on their first demo `94/´95 as well as 2-3 shows. It was really cool and they are still good friends of mine. I haven’t played drums since then but I remember that I was pretty fast, haha.

You have been a part of the Metal music industry for several years now. Have you managed to earn your living through music or do you have a daily job to pay the bills?
I haven’t earned shit from the music industry so I have a daily job to be able to survive. It’s sometimes really tough to play this kind of music and be out there doing some shitty touring and at the same time pay your bills. But nowadays we only accept shows that give us plenty to make it worth the effort. There´s less touring but I really don´t mind. I’m too old to be fucked in the ass by cheap promoters.

Once again thank you for this interview and I wish you and your band all the best! Anything last you would like to add?
Thank you very much for the interview and to all the readers, please check out our brand new album “The Dark Epic”... and we might just come to your hometown and rock the shit out of it. Cheers!

One Man Army And The Undead Quartet - The Dark Epic