Right in the middle of the successful North US tour with FINNTROLL and ENSIFERUM, Olli-Pekka Laine, the bassist of BARREN EARTH, found some time to speak to METAL KAOZ about the tour and the future BARREN EARTH plans, revealing some really interesting stuff to METAL KAOZ readers. Read below what he had to say and enjoy our brief conversation. 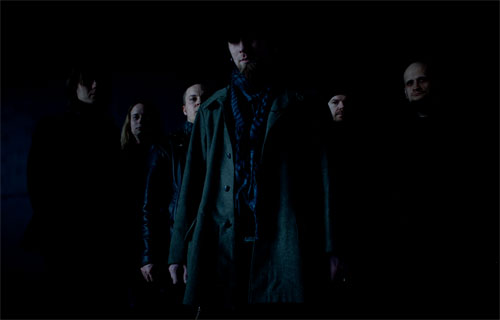 Hails from www.MetalKaoz.com!!! Where do my questions find you?
Hello there. We are currently in Philadelphia, waiting for the show after a well earned day off. Nice place, nice weather, no complaints!

How was the idea to form BARREN EARTH born? Did you have in your mind the musical direction?
There was a plan of forming a melodic, progressive Death Metal band. There were around 5 songs as home demos, which all ended up to the releases later on. So, the musical direction was sort of intentional in the beginning. After Kasper, Marko and Janne started to bring their songs, the style naturally expanded quite a bit.

Great, so what was the composing process for the debut album?
Usually we compose separately and do the arrangements together. Whoever writes the song usually puts down the lyrics as well, but with vocal lines and harmonies we co-operate in the studio or rehearsal slot.

You were honored as the Newcomer of the Year at the Finnish Metal Awards; did you expect that? Does this add some kind of anxiety for the next BARREN EARTH album?
I sort of expected that if we’d succeed in any category, it’d be that one.  Naturally I’m very happy with it! When it comes to the next album, all the songs have been done already. Therefore we don’t need to take too much pressure about it.

Finland and in general the Scandinavian countries keep producing great Metal bands; do you think of a reason? Is there something in the water? (laughs)
I guess there’s some strange fungus living in Finland’s pohjavesi, (laughs)! Seriously, it’s quite hard to say, why the metal scene is so strong in Scandinavia... Darkness, coldness, melancholy are usually mentioned while speculating on this question. Who knows if it’s as simple as that?

Yeah, we will find the reason, I guess.. How is the US tour so far? Did you have any problems with the weather?
Yep, we actually had to cancel two of the gigs because of the bad weather condition. That sucks in a big way! In Finland such tiny snowfall wouldn’t have been a problem, but I guess they cannot deal with such conditions in U.S. Worst thing is, that we had to cancel the shows, and people didn’t have a chance to witness the Finnish Metal madness!!

The fact that members of BARREN EARTH are already in famous bands gave a publicity boost in your opinion?
For sure it made some things easier, but in my opinion it would be unfair to claim that it’s all about our backgrounds. Without decent music the hype wouldn’t carry I think.

On the other hand, can the publicity induce severe criticism and consequently treat the band uneven when compare to other new bands?
Yeah, that’s why I’m not feeling too comfortable with the tag “supergroup”.

I understand what you are saying. So, what are your plans after the US tour?
We’ll start to rehearse the new stuff. In May we’ll enter the studio and nail our second album. I think we won’t do too many gigs before the album comes out. Maybe we will play a couple of festivals and some one-off gigs in Finland.

Will get any live footage from the US tour dates? I mean are there any thoughts to release a DVD?
At this point it wouldn’t make too much sense. We don’t have own technicians, because we are the first band on a bill. For example, the local janitors are doing the sound during our shows. Whenever we’ll do our first headlining tour, we’ll probably consider filming some shows!

That's true! How did come up the deal with Peaceville Records?
Well, I just simply send them our demo and they liked it. Very old school style!

You said about the next album so, have any written new music?
Yeah, we’ve got 13 songs written now. We have studio booked to next May, and hopefully it’ll be out late 2011.

Why did you choose this track as the first official video clip of “Curse Of The Red River”?
Actually Peaceville hoped that we’d use that song. It was also one of the tracks we considered to be the video song. Therefore it was pretty natural choice!

How difficult is to rehearse or touring with BARREN EARTH when each of you has running obligations with the regular bands?
Hmm, it is quite hard indeed. We do rehearse quite much, but touring is definitely different issue. Luckily the tours are often booked almost a year beforehand, so we can tap a free month for everyone early. We managed to do the US-tour, so it seems like if there is will, there is a way...

How much has AMORPHIS sound influenced BARREN EARTH? Was it something on purpose or it just happened?
I’d say that you cannot talk specifically about influences, because there are two former AMORPHIS-members in BARREN EARTH. I’d rather say that our composing styles affected AMORPHIS back in the days. Naturally being part of AMORPHIS affected to our ways to write music as well. It’s not that simple question after all..

Do you think that there are so many bands like BARREN EARTH in the music industry? Why somebody stops to BARREN EARTH’s sound and deal further with it? What is so special with this band from your point of view?
Actually I don’t know too many bands from the metal scene. Maybe AMORPHIS, OPETH and some old PARADISE LOST. I hope that we have strong material enough to catch people’s attention. We can handle our instruments quite well too. Having such hot guys in the band doesn’t harm either, hah! Seriously, I think the compositions plays the most important part in BARREN EARTH.

Well, Oppu thank you for your time! I will leave you now to get some rest!