CROBOT may not be 100% “appropriate” for a Metal webzine, but since in METAL KAOZ we love good music, then we see no reason for not having an interview with Chris Bishop to understand why we love so much “Motherbrain” and how it is definitely appealing to metalheads. Keep reading and keep liking good music. 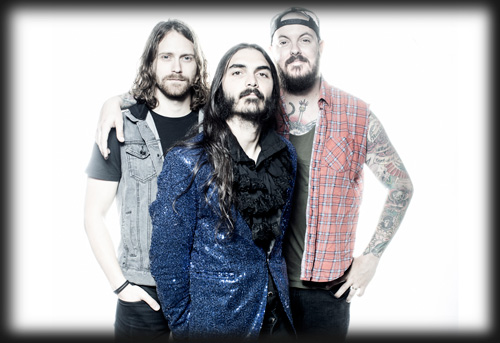 Hello Chris, and before I start with my questions, I’d like to say happy birthday to your buddy Brandon.
Hey Dimitris, thank you very much.

(laughs) Ok, I think we can start talking about music; “Motherbrain” is the first album released through Mascot Records; was there any specific reason why you chose to sign with them?
When we were looking for labels, Ron Burman [label president in North US] was the first one who showed interest in signing us. I’d say that he was on our case for one year as he really wanted to sign the band and we already knew that Mascot is a great label. We just wanted to make sure we would make the right decision. It means a lot when someone really believes in you and wants the band because they think they can help. I believe we made the right decision also because to have a lot of people who can do great things for the band especially in Europe which was one of the reasons we signed with them. They helped make BLACK STONE CHERRY who they are and I also believe that with our music style we have a better chance there (Europe).

Man, I love the video you did for “Low Life”, although humor aside, I believe you are using irony to touch some serious subjects. Or at least this is my interpretation of the video.
Yeah, I think with this record especially Brandon wanted to write a little less about dragons and wizards, which is awesome and we always that side of us, and more about relatable things and things that people would interpret however they want. I think with “Low Life” Brandon wants to say that there are people who hold they head up high thinking that they are better than everyone but in the end of the day no matter who you are, you are not better. Or maybe after the first listening, you may think that the song talks about being a low life which is fine too; if that’s the way you hear the lyrics and want to sing the song saying you are a low life and you don’t give a shit then it’s fine as well. We wrote this song for American Rock radio as it is our catchiest song we’ve written and definitely a tongue in chick.

How much was the band involved in the concept of the video?
The guy came to us with the idea of shooting the video in one shot and originally this was what we wanted to do. But then we realized we were not that good actors so we cut it into three shots and that works so much better.

I guess your outfit in the first part really has some Dwight Schrute from “The Office” TV series; I am not sure if the colors you chose had anything to do with that.
(laughs) Well, we had to change outfits for every shot and one of those was in the business room and obviously we wanted to look like business men. Another one was to be more like an office look and it really just came together. Since we are bunch of bald guys, we had to buy wigs and the moment I put that wig with that yellow shirt, it was so like Dwight Schrute (laughs)...

(laughs) Even though you do change outfits, the lollipop in Brandon stays for almost the entire video…
Yes, he is hilarious! He is our comic relief when we are on the road.

For the songwriting of this one, you worked with Johnny Andrews, right?
That is correct.

How did this collaboration come up and what was his input?
We met him through Mascot Records; when we were about to start recording the record Ron Burnam asked us if we were open to work with Johnny Andrews and we did like the outcome it would be fine to throw it out of the window. So, we went to Atlanta and worked with Johnny and he was great. He had the whole concept of the “Low Life” thing and we messed with different structures and riffs for a day and the next day we returned and nailed down the structure. That was one of the few songs that we wrote that way and focusing on the catchy part and build the song around. Usually, we have the riffs and Brandon figures out where to place his vocals. It was cool learning experience and see how Johnny writes songs. And he is a phenomenal song-writer.

It feels like the position of this song on the album’s tracklist is kind of a break from the more serious and kind of dark songs.
That’s right. In the same sense, a song like “Drown” would stick out from the record for being so heavy so would “Low Life” for being so Pop-py. We tried to sandwich “Low Life” between the heavier stuff on the record. If you are not into the heavy stuff, you will have a break with “Low Life” for sure. We always want to try to find a balance of something that is really Funky, dance-y and catchy to something that is really heavy, Doom-y and BLACK SABBSATH-y. Putting all those different worlds into one record is an achievement for us.

Was this something that you want to do or was it something that just came up during the song-writing process?
I think with this record we wanted to extent every end of the spectrum for CROBOT. We’ve always had Funk-y and Heavy songs and this time we definitely extended the heavy and also the catchier side of things. Of course we thought of the fans first and they would take this, because we do have some hardcore fans that are also old-school metalheads and they are the one liking “Low Life” the most (laughs). Sometimes you never know and you just have to write songs based on your gut and who cares after that.

This is exactly what I was trying to get your opinion on; because at some point and after four albums a band may find itself being confined by the sound it created, if you know what I mean. And it is great to hear you say this.
Right, we’ve made the records exactly how we would like them to be and did them in a very similar vintage Rock way. This is what we thought it would be cool for the first three albums. With this record, we wanted to do something different and have a bigger more modern production. And that alone, would change the feeling of the record and kind of push the songwriting a little bit.

And this is why [for the production] who teamed up with Corey Lowery, right?
Yes, he is the guy we wanted to work with to get a big drum sound, big guitar production. Corey made sure that it was not only soaring vocals.

I think you’ve also enhanced the sound of the bass, if I am not mistaken.
The bass in this band is a weird thing because I play low octave riffs with my guitar with an effect so the bass has to fit in a very distinct way and I love the way he did it too; it is not exactly like ROYAL BLOOD, it does not have the sort of feeling to it but it definitely has a riff-centric base to it.

Who did record the bass parts in “Motherbrain”? Was it James [Lascu]?
No, I and Corey did all the bass parts. We had finished the song-writing and the pre-production without James and this sucks because he was there and had been touring with us. It was I, Corey and Brandon who wrote and recorded the album.

Cool. You have some US live dates lined up, so when do you see the band playing live in Europe?
Hopefully in the beginning of the year we will be going back to the UK. Basically, we are trying to get on a big tour either in the UK or in the States, whatever comes.

Why only in the UK?
I say UK now because we did so well there with a headlining tour. At the very least we don’t get an opening slot in a big tour in Europe or whatever we know that we can go to the UK and afford to do whole tour.

Yeah, that makes sense. Have you chosen what songs from “Motherbrain” will you be using in concert?
Up until now we have been playing like five and we will be adding two more, so it’s a lot. The new songs are really fun to play live and they work well with the crowd. We’ve done lots of festivals where people do not know the band and we could see an immediate response to the new songs and that’s a good feeling.

Thank you, Chris. We will see you onstage in Chicago at the end of October.
We love playing in Chicago, so please come and have a beer with me. Chicago is one of the best cities for us.