AFM Records released “Hymns For The Drunk” to honor the time TANKARD were in the label’s roster and this also gave METAL KAOZ the opportunity to speak to Gerre over Skype about this occasion. If you say you like Thrash and you don’t know TANKARD then you have a lot of homework to do and even more beers to drink το repent for this sin. At any rate check below what was discussed! 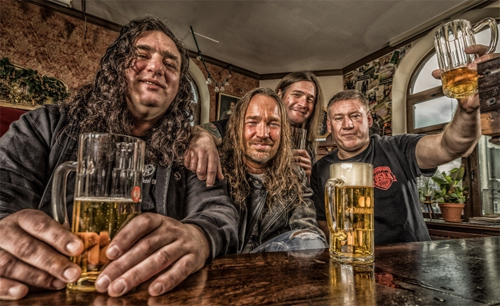 Hello Gere how are you?
Good evening Dimitris, I am fine thank you.

Am I the last of the long list of interviews you did today?
Yes but it was not that long.

Ok, I will make it a long one then.
(laughs) You can make it as long as you want man.

Let’s get on with my questions; before “Hymns For the Drunk” you released “Eagles & Tankards” so do you see Eintracht Frankfurt getting into the new season of Champions League?
(laughs) That would be something like a wonder but I don’t think so. At the moment they play very strong but we will have to wait for the end of the season to see the outcome of their efforts. Bayern Munich is outstanding and it is a team with their own league. The rest of the teams are so close together and everybody can win everybody so you can never know. At the moment it looks really good and maybe we can reach Europa League.

Oh man, I wish you the best for your team. So, AFM Records released the “Hymns For the Drunk” compilation covering TANKARD’s years with them. How much was the band involved in the making of this?
AFM Records had this idea of releasing a compilation and we worked with them because it is always better to work together on re-releases or compilations. We chose the songs and worked on the booklet with them. They also had the idea of releasing this as a special boxset at 500 pieces with the alien inside and the double vinyl in gold/brown color that looks like beer and it tastes like beer… (laughs) We were really surprised to see this release entering the charts without new material.

Yeah that makes sense. What is the first thing you remember when you think of the day that you signed the contract with AFM Records? I think it was a rough era for TANKARD back then.
Henner [Andy Allendörfer] was the owner of AFM Records back then and he passed away almost 13 years ago. So, he was a big TANKARD fan and he basically brought new life into the band. He offered us a new contract and he said “TANKARD has to get back on the top of Thrash Metal” and the label did a lot of promotion for us. The “B-Day” album released in 2002 was very important for the band; I would not call it a rebirth but it was a new start; we had a new contract, a new producer and powerful record company doing a lot of promotion. So, going to AFM Records was a very important step for TANKARD. We are really thankful for signing us back then.

Did it feel weird at all leaving AFM Records?
It was just that the contract ended and really we had no issues or troubles with AFM Records. I think it was time to try something new and Nuclear Blast offered us a really good deal. Nuclear Blast is a powerful label and they are doing a lot of promotion so at the moment we are very satisfied.

(laughs) You should do that I guess… My question is how much do you think the record labels have changed over the years?
Nowadays, they are making money out of selling records and in fact you don’t have to sell many albums to enter the charts so it is all about promotion. Noise did a great job and with Century Media we did two albums but it was the end of the 90s and it was the best time for Thrash Metal.

Well, the 90s was not a good decade for Metal in general.
Yes, you are right.

How does it feel when you look at this compilation; is it like closing a chapter of the TANKARD book or is it closing the entire book?
It is a great way to look back because we had good times and it was also an important part for the TANKARD history. We have also the re-release of the Noise records coming out and this means that the band is still alive and the people are interested.

Looking back at those re-releases must feel like looking at old photographs right? Does it make you feel a little bit old?
Yes, of course but it also makes us feel a little bit proud. I mean after 36 years TANKARD are still alive and are part of the Metal scene.

In fact the band has pretty much the same lineup for decades…
We have been together since 1998 and this is nearly 20 years; this is really amazing.

Of course it is, so is it beer the secret for this?
(laughs) I think the secret is that we are still into this kind of music and it is still fun. Another thing is that we all have our regular day jobs so we don’t live of the music and we can do whatever we want. We are totally independent and on one side this great but on the other we are not able to play 100 shows in a year and cannot accept all the tour offers. But we are doing our best.

Speaking about years, in the cover artwork of “One Foot In The Grave” there is a hand coming out from the grave holding a flag with 35 written on it so do you see TANKARD retiring any time soon? The title track of that album talking about retirement…
You have to look at the album’s title in an ironic way. This does not mean that this would be our last album so I think it is our way saying that “we can start our next 35 years”.

That makes better sense; you do use humor in the lyrics however I think in the last albums you have a serious backbone in the lyrics.
Since “Chemical Invasion” we try to mix serious stuff with humor and I think this is not something new. However, we do live in special times and if you look what happens all over the world and you will also see what kind of leaders there are. So, you are right the focus nowadays is more on the serious stuff.

On a more serious note do you think that “Secret Order 1516” can protect the German beer?
(laughs) This song is about fracking and how the poison the ground water. So, you are able to brew the beer following this law.

TANKARD is a band that plays shows on Fridays and Saturdays with some exceptions; so doing a full headlining TANKARD tour is completely out of the question?
No, not completely. I mean we did this in 2016 or 2017 in South America and we played 9 shows in 10 days. And this means that we had to use vacation days from our day jobs so It is out of discussion. This year we are going to do 38 or 40 shows and we are totally booked. We are going to Japan and Mexico for festivals and around those days we are trying to book some shows; like in Guatemala and Columbia. We are trying to spend all of our spare time doing concerts but this year there is no time for a full tour.

Got it, but what about North US?
There is nothing planned at the moment but we would really love to come back for some shows; that would be awesome.

One question that I like to ask Mille from KREATOR is doing a German Invasion type of tour with SODOM, TANKARD, and DESTRUCTION that would have been amazing.
We did some festival shows with those bands for the very first time and it was great. It is difficult to put all those bands together for an entire tour because everyone has different plans but I agree this would be awesome for some shows. We would love that.

We would love that too. So, TANKARD almost release one album per two years..
(interrupting) Last time we needed three years.

Indeed, so when do you see the band returning to the studio?
The last album came out in 2017 so this year we will have no time to write new songs. We will see and I think we will have a meeting to discuss and decide what we want to do for the next years.

Ok Gere thank you for talking with me after almost ten years (laughs)...
(laughs) Thank you for your support, man, and we really hope to come back to the US. I hope this will happen next year!