There is absolutely no doubt that MANILLA ROAD had a great year following the release of the impressive “Mysterium” album. METAL KAOZ had the chance to meet the band’s mastermind Mark Shelton and had the conversation below, getting the latest update on the making of the new MANILLA ROAD album and the band's plans for next year. Things are looking great for this legendary band and METAL KAOZ could not be happier! Up the hammers and down the nails! 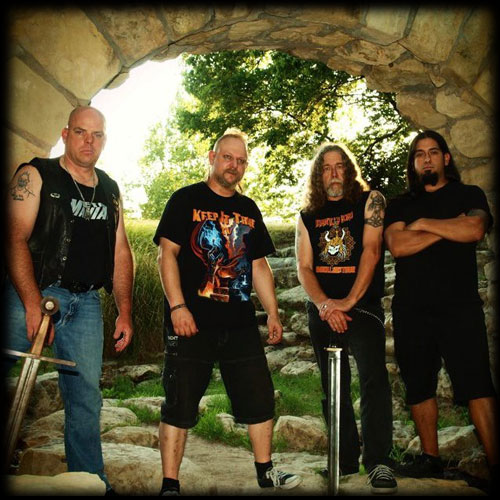 Hi Mark, thanks for having METAL KAOZ backstage before the MANILLA ROAD show here in Chicago.
The pleasure is all mine.

I see Rick Fisher being with MANILLA ROAD once again; does this mean he is ready to get back?
Mark: He is still in it, one might say (laughs). We never lost contact with each other, you know and he played almost for the entire 2013 with us...
Rick Fisher: Yeah, we played the entire “Crystal Logic” album...
Mark: Yeah, he’s going to play with us tonight so we will see what happens.

Do you think that MANILLA ROAD has been re-energized, especially after the release of “Mysterium”?
I think a lot of that has to do with getting Neudi on the band because he fits so well with his drumming and he can play all the new stuff that we are coming up with. Also, I think the entire Metal scene seems to be re-energized.

You say so?
Yeah, especially in the live theaters in the States and in Canada, the crowds are really strong. In fact, in Canada we played some sold-out shows and we are really well received in the US in this tour we did. We had a really good year. I think the band is getting more attention and PR especially now with the new record deal in Europe.

And you have all the re-releases coming out…
Yes, that helps too and just the fact that there are people interested in them helps. We wouldn’t have any of this without the fanbase being really interested with what is going on. In fact, the fanbase seems to be growing; a couple days ago, I saw a YouTube video showing a young band named PANDEMONIUM, and they cannot be more than 16 years old, performing in some school’s theater playing songs from JUDAS PRIEST, BLACK SABBATH, METALLICA and MANILLA ROAD’s “Necropolis”. They are not extremely great, but they have a lot of potential and they played it actually pretty good but they just need to work on the vocals. But it was incredibly cool to see someone at this age playing one of our songs.

Yeah, that’s really cool! So, you have a new album on the making?
Indeed and as matter of fact we only have left one bass track to do and then short of nit-picking the vocal parts. The entire album has been pretty much recorded you know. Josh has just one bass track to do and then it’s just a matter making sure we’re happy with every single thing.

Is there an album-title?
Yeah, but we’re not going to talk about it yet. I will just say that it’s a concept album.

Ok, can you say something about the concept at least?
It’s like a philosophical concept about the beginnings of man’s civilization back in Ancient Mesopotamia and how it relates to the religions nowadays and stuff like that. You know me, I like to pick on religion every now and a while and I am doing it again. I don’t know, maybe I will become the Bill Maher of music (laughs).

That would be interesting… (laughs) How many songs are we talking about?
There will be ten songs on the album with a couple of fairly long ones and some short ones of course. It’s all over the board and style-wise it is not as direct as “Mysterium” was. Actually, at this point I think we are all in agreement that this is better than “Mysterium”. And this is kind of weird because at first we were thinking like “how can we top “Mysterium”” and now it seems that we have. So, we are really looking forward to releasing it; as I said, there is only one bass track to do.

(addressing Josh) So, it’s your fault...
Josh Castillo: (laughs) yeah, it’s my fault. Just blame it to the bass player.
Mark Shelton: And then I think we will work the way we did with “Mysterium” because it turned out really well and there is no point to fix something that is not broken. Everyone agreed we did really well with “Mysterium”, so I am sure we cannot do any worse than that. It can only go better I think.

Are there any guests?
No, not on this one, it is just the four of us. We had more time to play with Neudi and tighten down the whole arrangement of things and even had a little chance to rehearse next year’s tour material already. I think this helped us to make a better album.

So, what is the plan for next year?
Obviously we are going to take our time to finish the album and make sure we have a good mix on it. And this can take as much as one or two months depending on what we’re going to do. The next thing to do is work with all the agents to solidify what will happen for the rest of the year.

Have you set a release date for this album?
Not yet but the plan is to do this sometime in the early 2014; hopefully in February or March. The mixing will take most of the time and after having done this, it’s a matter of giving it to the label in Germany that has the first pick to see if they want it and run with it.

Are you talking about High Roller Records?
No, I am talking about Golden Core Records in Europe. Over here in the States we haven’t yet solidified the deals but we have some propositions.

Don’t you have a deal with Shadow Kingdom Records?
Yes, I can do it with them but we haven’t really talked about the new one yet.

What about the show in Dubai that got cancelled; what happened there?
I think the promoters had some financial problems and a couple of days before leaving for Europe, we found out that they didn’t have the money for the flight tickets to get us there. They said that they could borrow the money for the tickets but I told them that it wouldn’t be a good idea to do it. I think that the festival happened but they had a lot of problems and they had to move in a smaller place. We don’t have a problem playing in small clubs but the entire festival seemed to be disorganized. So, we stayed in Germany for an extra week and we rehearsed more with Neudi.

Getting back on the re-releases where you have a lot of bonus material, have you even thought of getting all the photos and the articles and put them in something like a photobook?
I had a few people approaching me to write an autobiography or something like that and I am thinking about this (laughs). We have been working on a short of a documentary about the band and Neudi has put a lot of work putting this together...

He is really good at this, right?
He is remarkable and he does all shorts of things. And he also has a TV show in Germany, so he knows his way around this. MANILLA ROAD was never a video band and it was always about playing live and being in the studio. And I am not interested in making music videos showing me playing in the woods (laughs) or what ever.

Still, a book would be awesome.
Yes, between all this we have so much memorabilia and that it’s ridiculous, so this may be something that we really have to look at and see if there is anyone who would like to release it.

My last question will be a cliché one; what keeps you going all these years?
The interest that the fans have in the music, the band and the message. I cannot blame anyone else except the people who love to come and see us playing live and the ones who are buying our music. These are the ones keeping us going as long as they are there feeding the fire we will burn, you know?

This is the best way to end this interview. Thanks again, Mark for your time.
Thank you too buddy, it was great finally meeting you. See you in a couple of hours.