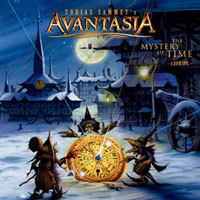 Although EDGUY have failed to ignite my interest, Tobias Sammet managed to make me a fan of his AVANTASIA works, especially with “The Scarecrow” and the two follow-up albums. Then, I moved to the “Meta Opera” parts and I found myself hooked. You see, I love what we all like to call Rock Operas, where there are a lot of guests that serve the purpose of a concept album, playing different characters. So, I was pretty excited for “The Mystery Of Time” and I was constantly reading the news about every name added to the guest musicians list. I think we all agree that projects like this one are extremely tough to manage since the composer has to effectively take advantage of every guest and make him part of the entire picture. Let’s see what Tobias had been working on all this time.

I will start from the end by saying that this album is closer to the EDGUY’s Power Metal norms than the previous AVANTASIA albums. I mean, there is that general happy atmosphere that I have a hard time to digest, or understand if you prefer. Sure, the compositions are pompous and dense but I miss the part of the dark atmosphere I found in the last three albums. I guess this album sounds to my ears like it was written in such way to meet the guest singers’ vocal requirements and not the other way around. In the previous albums it was obvious that the guest were playing roles via their characteristic timbre. Anyway, this is strictly a personal opinion, so don’t let me spoil the joy of listening some of the golden voices in Metal, backed up by the thick compositions.

The surprise of the album is definitely Biff Byford who really changes the scenery with his unique timber in “Black Orchid” and in the ten minutes opuses “Savior In The Clockwork” and “The Great Mystery”. In fact, these three songs are the highlights of the album and I think are closer to the aforementioned previous AVANTASIA albums. It would be a crime to forget PRETTY MAIDS frontman Ronnie Atkins who lends his harsh voice in the fast “Invoke The Machine” that fits his singing style like hand in glove. In fact, this could easily be mistaken as a PRETTY MAIDS song, especially via the hard hitting groove and the multiple vocal harmonies.

Once again, Michael Kiske shines with his powerful and diamond-clear voice who takes the songs in a higher level. Take for example the keyboard-driven “Dweller In A Dream” with the smooth bass break that leads to an addictive chorus during which Michael welcomes an almost Hard Rock vibe (yeah, he can sing that way also), while reaching forbidden pitches for many singers of his caliber. The album closes with the epic “The Great Mystery” that brings together Biff Byford, Bob Catley and I think Joe Lyn Turner in an almost SAVATAGE-esque fine blend of melodies and groove changes. I tell you, mixing the singing styles of Byford and Catley is like an alchemist’s craziest dream in his attempt to make gold.

Are there very good songs in this album? You bet they are, but like I said, they do not fit to the AVANTASIA profile I learnt to love with the recent releases. The Power Metal oriented songs are closer to the EDGUY ID, failing to be considered as part of a story. The bottom line is that you can judge “The Mystery Of Time” as a concept or as a regular album. I’d say that it fails in the former and succeeds in the latter, so it’s up to you to choose your vantage points.