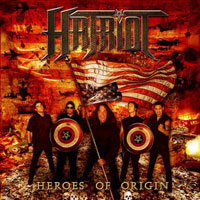 Sometimes you can resist taking a walk down the memory lane and nowadays this happens a lot, especially in the Metal scene. I cannot pinpoint the reason why, but I won’t say no to the stream of 80s reviving bands which know what and how they are doing. Because, when many bands start walking towards the same direction a trend is created and everyone knows that Metal and trends do not mix well. But in the case of HATRIOT things are looking really old-school simply because there is Steve Souza behind the mic and if you know your Metal, then it’s kind of redundant to mention EXODUS, early TESTAMENT and DUPLIN DEATH PATROL... oh, blast! I just did.

HATRIOT is the band’s name so what about the music in “Heroes Of Origin”, you might be wondering. Personally speaking, I’d be terribly disappointed if Zetro had decided to sing something different than Bay Area Thrash. So, in that way of thinking not only I am not disappointed but I am extremely excited since HATRIOT seem to be walking in a parallel paths with the Zetro-fronted EXODUS days (sorry but even if I like Dukes, the nowadays EXODUS are not that Bay Area-ish). Steve made this band kind of a family matter having in the lineup his two sons who seemed to have done the Bay Area Thrash homework in the bass and drums. “Suicide Run” sets the record straight about the musical content of this album kicking with some SLAYER-esque guitars (I was thinking the intro of “Black Magic”) just before the singing explosion by the trademark Zetro singing style takes place. His unique way of sounding aggressive (in a screaming way) but keeping his articulation clean (in other words, you can understand what he is saying) is still here and reminds us of the golden Bay Area Thrash days. Even the guitar distortion and the riff structure point towards the early Souza-fronted EXODUS ear and I am absolutely fine with it. The production is also amazing with natural sounding drums (love the high hat action) and dominating bass in the rhythm section. By the way, the rhythm section is solid and that also means lots of headbanging time like it happens during the double bass drumming of “Weapons Of Class Destruction”, the bass driven “Murder American Style” and the mid tempo (in the EXODUS way) “Blood Stained Wings”.

But Bay Area Thrash without a decent amount of riffs would be beer without alcohol and here Kosta “V” and Miguel Esparza seem/sound that they have used their influences the best way keeping everything by the book, delivering lots of face-melting lead guitars and topping everything off with solos that fit this style like spicy sauce on chicken thighs. And I am talking the kind of solo that stands side-by-side by the headbanging rhythm section like SLAYER and METALLICA used to do during their teenage years.

I don’t know, maybe it is because I like Steve’s vocals that much or maybe because I learned about Bay Area Thrash with EXODUS and TESTAMENT (ok, and METALLICA) but truth is “Heroes Of Origin” made my day and that’s more than enough according to my Metal dictionary. So, if you breath the same Thrash air with me, then check this out ASAP.

01. Suicide Run
02. Weapons Of Class Destruction
03. Murder American Style
04. Blood Stained Wings
05. The Violent Time Of My Dark Passenger
06. Globicidal
07. And Your Children To Be Damned
08. The Mechanics Of Annihilation
09. Shadows Of The Buried
10. Heroes Of Origin