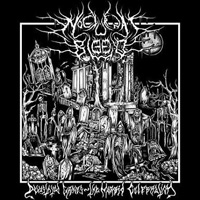 Under the pale moon’s light inside an old and abandoned cemetery the dead will rise up to conquer and slaughter everything. What will resurrect them? But of course NOCTURNAL BLOOD’s debut under the title “Devasteted Graves – The Morbid Celebration”.

This horror comes from California, US and behind it there is a person named Ghastly Apparition. Apart from this album, he has released among others a split with SANGUIS IMPEREM via Nuclear War Now!, or the 7” “Invocation Of Spirits” via Hell’s Headbangers. It’s time to go inside this cemetery.

Friends of ancient Death/Black show some interest here, because the seven compositions included here are very good. Without introducing something new the album is based upon old and effective recipes that work perfectly and you will feel the hot breath of death caressing you. The amazing sound is also a big bonus with the highlight on the guitars. They build an amazing background like they are emerging from the very depths of the earth but with a riffing distinctness and perspicuity. And that is good because from the very beginning this album wins you. Besides that, the drum work has a physical and necro sound giving us great pleasure. Last but not least, the ghoulish vocals sound kinda of outstretched in space creating additional darkness and terror.

NOCTURNAL BLOOD start with some BATHORY / HELLHAMMER influences and after spending some time worshipping in front of the BLASPHEMY altar or even the PROFANATICA one and they end in front a BEHERIT banner. Especially the latter, comes forth in songs like “Chaos Mass” and “Ritual Lust” that have strong impact while some slow parts take me even to GOAT VULVA!!!

Generally “Devastated Graves – The Morbid Celebration” is an ass kicking album. Simple and hammer smashing. The middle part of “Ghouls Wrath” has plucked my neck and the raging violence of the drumming in “Death Calls” and “Impure Devotion” (good idea in the refrain) will conquer you. I believe we will hear much more from them in future.  Apart from the cd version there a vinyl one with A4 size booklet inside and a patch. The cover above is of that version.