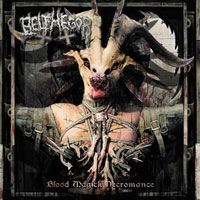 I had always the impression that BELPHEGOR were getting better in every album. When “Walpurgis Rites – Hexenwahn” hit us I thought the Austrian band reached an upper limit delivering an excellent album. I tell you in that album BELPHEGOR solidified a personal style full of shredding riffs wrapped in a brutal sound through the Satanic looking glass we all metalheads like in our Metal.

So, when the news that Helmuth and Serpenth were already working on the next album made me think that the danger of overworking themselves could be very close. Yet again, I was totally surprised since “Blood Magick Necromance” is at least as good as the previous album. “In Blood - Devour This Sanctity” enters grabbing you by the throat with massive guitar riffs soaked in the style of BELPHEGOR. Peter Tägtgren had done his magic behind the sound board and gave the album such a solid profile that becomes shocking. The drums help the album to the maximum with fast tempo changes (almost blast beats) and double pedaling-work to snap your neck against. One thing that is kind of different from the previous album is the song time duration; I think BELPHEGOR challenged themselves creating more diverse songs that in fact need some time to grow in the listener’s mind. Just like “Impaled Upon The Tongue Of Sathan” where the old virtues meet the new ones; you can find prime Black Metal elements (mainly in the guitars) along with the SLAYER-esque solos (the early ones). If you try to spot the influences then names like DIMMU BORGIR, IMMORTAL make come to mind but no one can be sure because BELPHEGOR have managed to molt a sound of their own that after all these years it is not difficult to recognize.

One more thing that I really enjoyed while listening to “Blood Magick Necromance” is the clean guitar breaks found in several places creating a blasphemous atmosphere that goes hand in hand with the band’s mentality. “Rise To Fall And Fall To Rise” is such a great track with a bone crushing rhythm (fast and slow), deep growling vocals marked by Tägtgren’s work in the studio.

There is nothing to be added here; BELPHEGOR did it again creating a better album than “Walpurgis Rites – Hexenwahn”. I am not going to wander whether this release will be their creativity roof for the Austrians, since you can never say never…