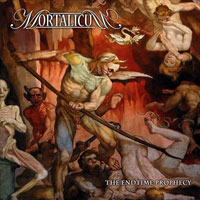 One more promo pack from a band, hailing from Sweden (Sundsvall) playing Heavy / Doom Metal came to METAL KAOZ HQ and since I haven’t heard a word before about MORTALICUM, I was quite curious to see what these Swedes have to offer to nowadays’ Doom Metal scene which seems to have seen everything. “The Endtime Prophecy”, released by Metal On Metal Records, is the band’s sophomore full length release and starting by looking at the album’s artwork (where demons came to Earth to rule the humans), I was almost sure that things will get quite interesting. But I was wrong.

First of all, I thought that the era where the record labels sent out promos with voice-overs every 30 seconds was left in the past, but Metal On Metal Records unfortunately maintains this ‘annoying for the reviewer’ tradition. Plus, I had to deal with Henrik’s more than high-pitched vocals that in some spots completely cover the guitars (I’m not speaking about the drum work at all, since the production decided to ‘bury’ the drums in the studio’s deepest basement). Don’t get me wrong here; I am not saying that Henrik has a bad voice – this kind of vocals just doesn’t fit to the band’s music style. During the listening of the 9 songs, you’re going to find some clarity moments (especially if you love the BLACK SABBATH “Headless Cross” era), like in the opening “My Dying Soul”, especially if you love the high-pitched vocals, and not only during the chorus parts. There is some decent guitar work approaching more the traditional Heavy Metal sound than the Doom one (that’s not a bad thing for my ears), even if I consider the “Planet Caravan” copy/paste edition of “Ballad Of A Sorrow Man” unfortunate and misplaced. The sole highlight moment of the entire album lays in “Embracing Our Doom” and its epic Doom-y guitars, especially when Henrik decides to sing without pushing his vocal chords too hard, giving to the listener a smooth and baronial result. Unfortunately, this moment lasts only for 10 minutes.

With so many Doom Metal-oriented stuff out there (and I’m speaking only for albums released so far this year), I think I’m going to pass on MORTALICUM’s new album and never look back. Simple as that.