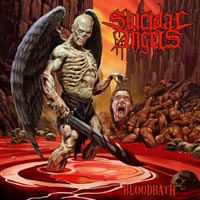 SUICIDAL ANGELS have been dominating the underground scene for over five years and I think it is about time to get known all around the Metal globe. This Greek Metal breed is ready to take the big step having in the arsenal the fourth full length album.

SUICIDAL ANGELS have already been included in the billing of many famous festivals and have done several headlining shows all around Europe and thus have earned lot of respect among metalheads and fellow musicians. Around three years ago and after winning a music competition, they joined Nuclear Blast and soon after NoiseArt Records, confident to play in the premier league. Since the second release SUICIDAL ANGELS having been working having R.D. Liapakis (also lead singer at MYSTIC PROPHECY) behind the soundboard who I think took the band in a higher level. It’s also worth to mention that the cover artwork of this album like the previous one “Dead Again” is made by no other than the legendary Ed Repka who has created the some famous covers (MEGADETH, DEATH etc).

The Greeks totally devoted to the old school Thrash, influenced by bands like SLAYER, KREATOR, SODOM, SADUS and even the early SEPULTURA, have created an album full of hate, speed, and hell. The songs deliver tons of Metal thrashing riffs, hammering rhythm section and spitting vocals wrapped in absolute neck-breaking package.

“Bloodbath” features ten Thrash dynamites and please underline my saying. After the play button has been pressed the non-stop headbanging will threaten to crash your spine. All the tracks are above of what we all consider as good. Some of my personal favorites are “Bloodbath”, “Chaos (The Curse Is Burning Inside)”, “Morbid Intentions To Kill” and the band’s way to honor the fans “Moshing Crew”. The highlight of the album is the contribution of BOLT THROWER’s singer Karl Willets on “Legacy Of Pain”. Yep, the one who sang in “No Guts No Glory”...

...and SUICIDAL ANGELS have the guts and it’s time to go for the glory.