Cult Of The Fox - A Vow Of Vengeance 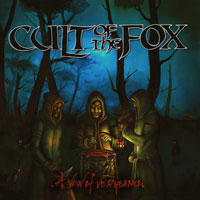 The educated metalhead who has been following the stream of new album releases in a constant pace must be aware that the Swedish Metal scene has been very active the last 10 years or maybe more. The excellent education program in Sweden, gives the chance to many kids to learn their way around music and I believe this has also an impact to the Metal scene. So, CULT OF THE FOX come from this country and their ancestry could be by itself the only reason to check their latest release. But that was not the only reason; one of the band members is a METAL KAOZ editor and a very good friend, so don’t expect me to give you an unbiased opinion. On the other hand, do you really believe that an album review is an objective opinion, since it is based on the writer’s taste and perspective?

“A Vow Of Vengeance” is the band’s debut full length release that comes after three demos that had been seeing the light of the day in a yearly basis from 2007. Even though, I was prepared to give a good rating since there was a friend in the band, I quickly changed my mind since the album is Metal solid! So, there is no guilt for giving a high rating to this album, simply because it deserves one. The music label is mainly Heavy Metal but I could not but to notice the striking epic layer that shines through the galloping rhythms and the catchy guitar leads. The harsh, but general clear, timbre by Magnus Hultman enhance the epic backbone one could characterize as old school. In general, the songs have simple structures with killer guitar lead breaks just like the ones in my favorite “Slave To The Reaper”.

Listening ‘closer’ to the album, I think I discovered some US traditional Metal influences in the vein of ICED EARTH (the debut album era), LIEGE LORD, OMEN and maybe with a touch of JAG PANZER. Maybe the aforementioned bands are generally faster than CULT OF THE FOX but I feel there is a strong connection that also justifies the label Power Metal in their music id. A fine example of this ‘speed’ difference is the mid tempo “Word Of Truth” that holds high the epic banner and features a great main melody you won’t resist humming even after the first CD spin. Due to the mid tempo and the very good and balanced sound production I had the chance to pay attention at the bass work building that solid rhythm a band wants in this specific Metal genre. The band’s Swedish ancestry comes forth during “I'm Working On That” where there is that killer Doom finishing touch in the riff based structure (loved the opening guitar work) in the lyrics (quoting “I’m digging a grave for a child with no head”) and in the BLACK SABBATH-esque bass phrases.

I believe that I would feel way better with this one if there was no friend in the lineup and the reason for this is quite simple; it is harder for the reader to believe my sayings that this album is very good keeping in mind my biased judgment. But if you have the slightest amount of trust in METAL KAOZ then you should be checking the band’s social networks to get a taste for yourself and then by all means join me to the CULT OF THE FOX!

Cult Of The Fox - Angelsbane