Machine Head - Unto The Locust 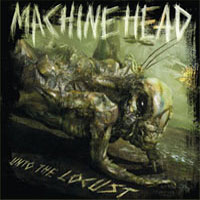 I have to admit that I cannot fully understand the story of MACHINE HEAD; I mean, after the multi-selling “Supercharger” the band had to search hard for a new record label to release the next MH album. The efforts crashed upon walls and the impressive “Through The Ashes Of Empires” was eventually released only in Europe. And then everything simply exploded for MACHINE HEAD! The album was amazing and drew more fans around the band giving them the recognition they deserved. And the US band did not sit on this success but returned with “The Blackening” and now with “Unto The Locust”, two albums that got a proper US release.

If there was an unofficial betting then I am sure no one would feel 100% comfortable to put money on the new MACHINE HEAD release, since it is very rare for a band to release three amazing albums in a row... But I am happy to say how wrong I am on this ‘cause “Unto The Locust” is A-M-A-Z-I-N-G.

The album starts with “I Am Hell (Sonata in C#)” which enters some chanting-esque lyrics and you can feel the tension building right in front of your face and then… the trademark guitar distortion enters along with a slow tempo and a killer bass sound. The lyrics send shivers down the listener’s spine reading: “I am hell, born in this mortal shell…”moments before the break and the ultra MACHINE HEAD characteristic guitar riff. This is what I call a powerful intro that after a while gives the torch to the fast and heavy groovy Thrash we have learned to love in the band’s albums. The melodic breaks and catchy guitar leads are also here creating the massive MACHINE HEAD wall of sound the band’s fans know and the young metalheads should learn. “Be Still And Know” hits hard with hearty finger work on the fretboard and even more vocal harmonies that add the melodic layer I personally love in this band. “Locust” sounds as impressive as it did when I watched the band onstage during ‘Rockstar Energy Drink Mayhem’ festival (read the report HERE). The main riff remains addictive as hell (with a PANTERA feeling on the vibrato), while Dave McClain deserves additional kudos for his solid rhythm and groove.

“This Is The End” features some nice METALLICA inspired guitar leads and some blast drumming and the fast-as-a-shark riffs that will make your neck snap. Flynn sounds pissed as hell and literally spits the lyrics making the song sounding totally explosive. “The Darkness Within” comes with an almost “Halo” profile with the clean guitar tunes but dives deep into the diversity sea through Flynn’s expressional reading (Eddie Vedder came to mind during the melodic lines). The vocal humming sounds killer as the guitar solo comes to offer some relief from the mounting tension that this band is building with skill and expertise. The child choir and minor orchestral arrangements surprisingly open “This Is Who We Are”. This song talks about determination and self-reliance, two elements that seem to be on the verge of extinction in the days we are living. There is a spirit-lifting solo before the twin guitar harmonies and the yet again explosive rhythm section.

Make no mistake, MACHINE HEAD have done it again and it will not be too much to say that this is one of their best albums - I like to say - so far. Watching this band working its way up, especially in the US, I think the saying through the ashes of empires is absolutely representative of their in-studio determination.

Machine Head @ The Metro, Chicago (US)