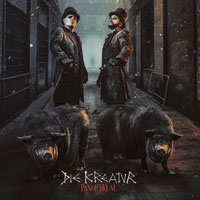 I can’t help but gravitate towards all things Greek and this includes words that seem to be of Greek origin. This is a good enough reason for me to explore about some little story hidden behind. In the case of Germans DIE KREATUR, the beloved child of OOMPH!’s Dero Goi and LORD OF THE LOST’s Chris Harms, the trigger was the debut release’s title, “Panoptikum”. I wonder if the title is a reference to Jeremy Bentham’s prison design with circular tiers of cells that serve the purpose of central observation without being seen (you can learn more about this by searching for Foucault’s theory of Panopticism). Add to this the fact that the 1920s and the stories about all kinds of freaks and creatures lurking in the dark was a source of inspiration (like for many writers throughout the years), and the title will seem like a perfect fit. But what does the music inside “Panoptikum” sound like?

If your cup of tea is Gothic Rock with a strong dosage of Neue Deutsche Härte, and you have a sweet tooth for bands like RAMMSTEIN, WEDNESDAY 13 and, of course, OOMPH!, you’re gonna love “Panoptikum”, and not just for its dark, electric-infused atmosphere. Sure, the twelve tracks (plus three bonus ones, with two being remixes) carry a pure dark, sinister feel thanks to the screaming Gothic finishing touches, but it’s not all about the atmosphere. You see, each song is different from the other, and this diversity is a huge plus, meaning that you aren’t gonna get bored spinning the album. With that being said, there is a black, velvet ribbon connecting the songs that winks at you in a retro way before inviting you to the dancefloor. Just check below the music video for the album opener “Die Kreatur” and all things will get clearer. Sure, the experienced ears will point out OOMPH!’s “Krüppel” as its distant relative, but notice how the aggressive guitars beautifully enhance the melodic keyboard-parts and how explosive the overall result is.

This is something I instantly liked during the first album streams; the keyboards add a natural fluidity to the Heavy guitars and vice versa, leaving the necessary space for each instrument to do its thing without overflowing DIE KREATUR’s outstanding blend of music styles. And since the German language is Greek to me (pun intended), I cannot comment on the lyrics, but I’ll underline that this didn’t get in the way from fully-enjoying the music. The energy packed in this release is dense, placing the listener on a constant roller-coaster using many influences to the sound, being a guarantee for a helluva time. I love the Gothic-ness and the larger-than-life orchestration in “Kälter Als Der Tod”, the Industrial character of tracks like “Zwei 100%”, “Untergang” and “Goldener Reiter” (that’s one of the bonuses), but also I was pleasantly surprised by the DEPECHE MODE-laden “Durch Die Nacht” as well as the more Metal-lic “Benutz Mich” – this one woke some DEATHSTARS-“Night Electric Night” memories up, so extra kudos for that. Digging deeper into “Panoptikum”, I enjoyed discovering layers such as the retro theatrics of “Schlafes Braut” that make you feel you’re listening to an intro part of some 1920s’ vintage circus / freak show, the characteristic CREMATORY flair and the impossible to resist foot-tap / headbang of “Mensch / Maschine”, or the Industrial-cabaret-like “Was Mir Am Wichtigsten Ist” that got me instantly hooked by bizarrely reminding me of 2009’s DIARY OF DREAMS.

It’s been a while since I’ve listened to such a diverse and packed with so many different goodies album. “Panoptikum” went down like a dark, Gothic fairytale and often times it felt inviting to dance, and others, to just whisper the darkest of secrets. Decadent, indulgent, aggressive… Are you ready to enter DIE KREATUR’s “Panoptikum”?