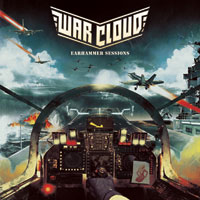 Have you ever noticed one or two record labels that almost everything they release fits your music preferences? Ripple Music does the trick for me, and sometimes it feels that I share the same taste for music with these guys. I mean, I trust with eyes closed that nine out of ten of Ripple Music’s new releases will be a winner for my playlist, plus their love for vinyl is one-of-a-kind and they really know how to treat LP releases, offering rare test pressing LPs and all those goodies that you’d like to have in your collection (to play and not just as dust collectors). Anyway, this presentation isn’t about Ripple, but their Oakland Hard Rock acquisition of revelers WAR CLOUD and their thunderous, (kind of) live album “Earhammer Sessions”, so let’s get right to it.

I got the first taste of this release with the promotional video for track “Striker” a few weeks back, and I was instantly hooked; the grainy, old-school-sounding vocals, the MOTÖRHEAD-esque intro as well as the melodic guitar massive waves that hit the bullseye are priceless and were more than enough to get me excited for this release. The plat du jour here is ‘70s Heavy Rock with a twist of speedy, ‘80s twin-guitar-based Heavy Metal, and really, it feels natural hearing these guys performing at such speed and confidence throughout the entire LP, like they’re in front of you with their gear set in your living-room. Glancing over at the tracklist, you may think that eight tracks aren’t enough to justify an LP / CD release, but let me stop you right there to remind you all these legendary releases back in the ‘80s that had eight tracks and were enough to rock your world for months… Plus, I believe ‘eight’ is the golden number for the vinyl format, especially when we’re talking about high-energy Heavy Metal, able to keep you close to your record player to drop the needle again and again to spin the whole thing ‘one more time’, like you’re a hard-working nectar-collecting bee.

Back to the music; tracks like album opener “Vulture City” and “Give’r” generously serve you equal parts of moshpit breaks and thrilling, melodic guitars, to satisfy at the same time your aggressive Metal thirst and your THIN LIZZY-driven hunger. The jam-my “Chopper Wired” and the beefy instrumental “Tomahawk” showcase the band’s closer-to-Hard Rock side as compared to the heavier-edgy Metal one, maintaining the energy high at concert-level. And how could you deny a track called “Speed Demon”, especially the moment you’ll get some serious KISS-goosebumps?

“Earhammer Sessions” isn’t just a show-off release of the raw and powerful nature of these guys, but a palpable guarantee that you can have tons of fun right in the middle (and comfort) of your room – all you need is the right equipment and a couple of cold ones on-call. Because, even though this isn’t a live recording (one of a venue that is) but a studio recreation-of-a-live-set, the result is pretty darn good. Recommended to blast this at high volume.