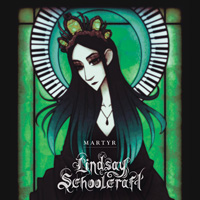 The name Lindsay Schoolcraft should be ringing a bell only if you have been following CRADLE OF FILTH, especially during their three awesome album release streak that has been going on since 2015. On the other hand, if you have no idea who Lindsay is, then “Martyr” may as well be a great introduction to her Gothic Rock world as she’s drawing inspiration from bands like LACUNA COIL or EVANESCENCE with the word ‘Gothic’ in bold letters. This means that there is no connection with CRADLE OF FILTH, unless you are one of the few who are aware of the strong Gothic foundations the British band has.

The opening piano melodies and the rhythm guitars in “Saviour” will definitely catch your attention in a WITHIN TEMPETATION catchy groovy way. Lindsay has a distinct voice with an impressive range that is not that audible when doing backing vocals for Dani. Even though the groovy songs grab your attention during the first album spins, the slow(er) ones will get you hooked, but first things first. “Dangerous Game” maintains the groovy title but sneaks in some nice orchestrations that may require a couple of listening sessions with headphones to show all their colors. Still, the guitars and drums are one step forward in the mix with the orchestration playing a building an atmosphere role, although I do believe they deserved a louder voice. Well, my wish is granted in “Stranger” where the dramatics have been enhanced generously, feeding the Gothic side of the album especially during the song’s second part, and I have to credit Tyler Williams who was responsible for mixing the album.

Powerful music (or heavy, if you prefer) does not mean distorted guitars and pounding double bass drumming because – believe it or not – lyrics can be equally strong(er) no matter if the music is based on keyboards. Yes, “Blood From A Stone” is one of those “heavy” songs with lots of passion in the vocals (especially during the second part) and I believe this means the lyrics are kind of personal but (still) totally relatable. I don’t think there is a single soul out there who has not been disappointed by emotionally investing to the wrong people but this is part of long ‘getting to knowing yourself’ process. On a bit lighter mood, this one along with “Remember” are perfect for your autumn soundtrack dealing with all things grey and dark. “See The Light” peeks through the Gothic veil that is covering this album with fast(er) bpms and some deep growling courtesy of NE OBLIVISCARIS’s Xenoyr. Oh yeah, this is a headbanger and I wonder if Lindsay have more of that kind in her song-drawer because it surely sounds awesome. However, I found myself drawn back to into the atmospheric songs with the amazing “My Way Without You” and the awesome effects (this may not be the best term to use here but I am not a musician to know how to describe) in the vocals that give an almost ethereal quality in Lindsay’s performance. And speaking of ethereal (and a bit creepy), I challenge you to listen to “Lullaby” with headphones. Yes, this is a CURE cover and Lindsay has done amazing job approaching this from a different angle, adding another level of creepy-ness and will give you chills. Damn, I almost felt spiders crawling around me, especially with those effects and string orchestrations… There is something different in Lindsay’s performance that I cannot put in words but I got shivers down my spine during “the spiderman is always hungry” part…

I was very much interested to hear how Lindsay would do in her debut solo LP and I’m amazed by the result. Sure, there is some experimenting here and there, but at the same time this is totally expected when a musician is testing the waters trying to find a personal sound. Be that as it may, “Saviour” is a great album and has lots to give if you let it. I hope it will make it on vinyl...

Cradle Of Filth @ House Of Blues, Chicago (US)

Cradle Of Fitlh @ The Forge, Joliet (US)

Cradle Of Filth - Cryptoriana - The Seductiveness Of Decay

Cradle Of Filth @ House Of Blues, Chicago (US)