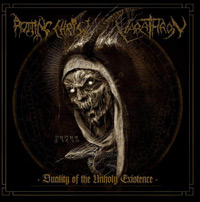 There is no better format to release some old-school Metal than on a 7” inch split. Sure, the days when the 7” were the hard-to-find gems among the deepest Black Metal underground corners are long gone, but that does not mean we cannot or shouldn’t indulge ourself whenever a chance arises. The “Duality Of The Unholy Existence” serves exactly this role and comes to spoil us with two most important names and ambassadors of the Greek Black Metal scene, that I believe is a category on its own. You see, bands like ROTTING CHRIST and VARATHRON have a created a unique sound spawning a new sub-genre in the Scandinavian Black Metal that shocked the scene back in the '90s. However, this is kind of ancient history and the purpose of these lines is to talk about this monolith of a split so, allow me to do the honors...

The first side of the split is dedicated to ROTTING CHRIST with “Spiritus Sancti” that can be easily characterized as a trademark song by the tireless hands of Sakis. Yes, you will immediately guess the band of the post “Aealo” era with the type of mysticism found in abundance in the band’s last LPs released by the Greeks. Before getting on the bandwagon “this sounds like this or that”, let me clear your way of thinking by saying that this is the ROTTING CHRIST trademark sound and that’s the end of this story. Still, “Spiritus Sancti” carries an old-school aura and maybe the distorted vocals have a lot to do with this, triggering the memories of the pre-“Dead Poem” days. The snare-drum along with the hi-hat action and the monotonous riff create the right tension that finds its outlet through Sakis’ growling (and unique pronunciation) being the perfect storm for some serious headbanging.

On the flip-side of the split, there is “Shaytan” by VARATHRON, a song that I see a bit more old-school [sic] compared to “Spiritus Sancti”. The opening riff blows all the clouds of doubt that this is Greek Black Metal with bold and burning letters. As the tempo picks up the pace my mind roams back to the '90s when this sound was being forged in the underground scene and thus, was known to just a handful of initiates. The ferocity of the drums, the guttural vocals and the Eastern almost traditional melodies check all boxes of that scene but not in a copy/paste way. That’s right; the song sounds genuine and honest and I am saying this knowing that these words may not be the best way to describe music but, I am sure there are ears out there that will hear what I hear.

Is this a recommended purchase? I would say "no", just because there are just 999 copies and I want those to get to the right hands who will appreciate the split by flipping it on the turntable back-to-back. And no, I am not a collector as I believe music, and especially vinyl, are meant to be played loud.

Side A
Spiritus Sancti - ROTTING CHRIST

Side B
Shaytan - VARATHRON