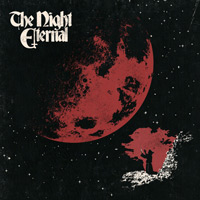 It has been rather too long since the last time I was drawn into a release just by reading the press release, even though in the case of THE NIGHT ETERNAL did not say much. Or maybe, it held the right elements to pique my interest and make me clicking on the ‘play’ button. Before moving forward discussing “The Night Eternal”, which happens to be the first EP and the debut release by these Germans, I should mention that I am always drawn towards to classic Heavy Metal on an EP format, even before listening to a single song.

EPs are by definition short in time and therefore, a band (especially a young one) has to put its best foot forward to capture the listener’s interest. That’s exactly what THE NIGHT ETERNAL had done by opening the four-track EP with “Eternal Night”. The minor chords, combined with the powerful vocals, are more than enough to hint that an outburst is coming. The classic Heavy Metal shines through the nice bass lines that - of course - point towards the first two MAIDEN LPs. The galloping rhythm section secures the references to the latter band, but soon enough, those expand to cover a larger NWOBHM area. Mentioning genres and styles only serves the need to better describe music in words because there is something more than that in THE NIGHT ETERNAL. It may as well be Ricardo’s distinct singing timbre or the sweet riffs that carry an almost dark / evil side especially, when the vocals take an almost growling turn. “Mark Of Kain” continues on the same dark path and can be borderline characterized as Epic Heavy Metal (I dislike the term “true Metal”) with a bit of FIFTH ANGEL hidden on the double guitar leads. Again, everything sounds tuned to perfection with the vocals coming a bit more diverse compare to the EP opener, hinting at the same time that Ricardo has some serious set of pipes. The last of the three originals tracks is “Vindicta” starting off with a mid-tempo rhythm and a guitar groove that brought to my mind METALLICA’s “Orion” and this is said in a positive way. This is a bit more complicated than the other songs and therefore showcases that THE NIGHT ETERNAL should not be considered as youngsters as far as songwriting is considered. You could easily throw some CIRITH UNGOL references when talking about the guitars that are shining as vocals do. This is definitely the most interesting song-structure out of the three. The EP closes with a JUDAS PRIEST cover that happens to be the “(Take These) Chains” underdog… I mean, the original comes from “Screaming For Vengeance” where there should have been “easier” picks for a band to do a cover. Still, THE NIGHT ETERNAL chose this one to feed their Hard Rock side that otherwise was not quite visible.

I am already sold on this EP and I’m looking into ways on how to import the vinyl edition of “The Night Eternal” that I think also comes in colored versions and will be out in early July. Of course, the follow-up question is, what can THE NIGHT ETERNAL offer on a full-length capacity, so hopefully we will soon find out. In the meantime, get “The Night Eternal” that sounds perfect for those cool summer nights with a bunch of cold ones in the cooler...