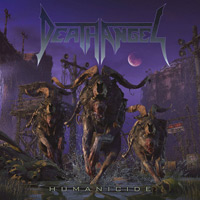 Paraphrasing the saying “you should not judge a book by its cover”, I am stating that “you should always judge a Thrash band by its live performance”. Especially in these modern days, where writing complicated riffs can be digitally faked, the ultimate place to see what a Thrash band is capable to deliver is the stage. That’s right; there are no gimmicks and aside from some fake smoke, there is nothing for the band to hide behind. The paint of the recent DEATH ANGEL, supporting OVERKILL, has not dried yet, only because it was an amazing and adrenaline pumped set. The band for San Fran performed with the gas pedal floored and made me feel a bit bad for having missed their last discographic steps, but after that show, I made a pact with myself to check “Humanicide” as soon as possible, and this is exactly what I did...

…and man, I got goosebumps just like I did when DEATH ANGEL performed the album’s title track on that concert. The melodic riffs play the role of a short intro that primes the way for the snare-drum action and Mark Osegueda’s vein popping scream. That’s traditional Bay Area Thrash alright, and if you are not familiar with the term, then you should be taking notes moving forward. Early SLAYER comes to mind with the first tremolo-action, while the galloping rhythm makes sure that headbanging stays high on the menu. The Thrash ferocity keeps pounding in “Divine Defector” that sounds like the perfect soundtrack for some violent mosh-pit action and as Mark is pushing his singing on higher pitches, I could not help but think of German Thrash and DESTRUCTION in particular - in other and fewer words; awesome.  Of course, the guitarmanship remains on a high level with Rob and Ted exchanging riffs and challenging each other at any given opportunity. “I Came For Blood” takes a break from Thrash and pays its dues to MOTÖRHEAD (while touching upon OVERKILL in the process) through the rhythm guitar before letting the snare-drum return to the trademark neck-snapping rhythm. I can definitely see this one in future setlists as it is ideal for squeezing the last drop of energy from the crowd by lasting a bit more than three minutes. DEATH ANGEL are (also) known for writing longer pieces with “Immortal Behated” being such a case. Starting off as mid-tempo, the track wears an evil grin on its face and steps a bit on Progressive territories through some nice bass lines and guitar leads. You will even hear some piano-sounding keyboards making it clear that DEATH ANGEL are not afraid to push the envelope without departing from Thrash. On the same stirring things a bit, is “Alive And Screaming” where Mark is delivering some nice melodic lines in the Bay Area-trademark chorus (during which, the rest of the band does the backing vocals), showcasing his wide-ranged singing. In the same groovy way, comes “The Pack” with the fists-pumping chorus (sing with me “loyal to the core”), while the build-up during the first seconds of “Ghost Of Me” will bring your thrashing blood to the boiling point at no time (I think Alexi Laiho is guest-lead guitar playing here). One thing that I appreciate in Thrash albums is whenever the bass guitar gets its own voice in the mix, and I will use “The Day I Walked Away” is the strongest piece of evidence for this.

I feel extremely satisfied for keeping the promise I gave to myself after the last DEATH ANGEL concert. The band sounds as good as it does from the stage and this means that this album has managed to transfer part of that energy into the studio. “Humanicide” is a solid piece of Thrash that has already wetted my appetite for the next opportunity to watch DEATH ANGEL ripping it up from the stage.

Overkill @ The Rave, Milwaukee (US)