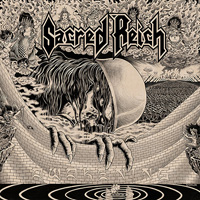 Even though the band from Phoenix, Arizona kept touring for years, there had not been any new music released with the SACRED REICH logo on the cover. 23 years is a hell of a lot time for any band on this universe to not have released anything new and therefore ‘getting back at it’ cannot be an easy task. Before getting into the meat of this album presentation, I’d like to give you a history lesson by remembering how many metalheads reacted when “The American Way” hit the stores and gaining a lot of air-time in the MTV (when “M” meant music). Even though everyone liked the album, they were blaming the band for selling out and becoming like METALLICA… Isn’t it funny? Oh yes, it is because after two decades I am reading online reviews and comments that “Awakening” is mediocre, not Thrash enough as “The American Way”. Like many things in life, one has to do some homework before being the next ‘opinion maker’ or ‘influencer’.

Personally, I had my ears primed and excited for this album, simply because seeing SACRED REICH onstage delivering all those classics with that energy level meant that these guys had still things to say and express. The drum-driven self-titled track was exactly what I had in mind; Thrash from the ‘90s with Crossover vocals delivered by Phil’s trademark timbre and pronunciation. The pounding break will be awesome to enjoy live, even though I had the chance to hear “Awakening” in a concert setting but it is a whole different deal when you know the song. What is characteristic in the Crossover genre are the opinionated lyrics that usually aim to slap society in the face with the hidden hope to wake people up. This is exactly how “Divide & Conquer” works and I will it up to you to translate what Phil is singing about. Musically, this song is ‘90s Thrash 101; fast snare-drum action, a catchy chorus and guitar solo that sneaks up on you. Yep, this is another one to add on your setlist. The rhythm section shows its sharp teeth in “Salvation” that screams SACRED REICH from start to finish with an attitude somewhere between “The American Way” and “Independent” but with the icing on the top being the guitar leads and solo. I almost got a THIN LIZZY taste during the riffs delivered just before the solo - how cool is that? Of course, Phil’s voice has matured (I hope he hasn’t…) and has a deeper and bit harsher timbre that adds another element to like here. If this song is not Thrash enough for your ears, then buckle up for the guitar rhythm assault of “Manifest Reality” that one can say has looked over Europe and especially to the German scene for some snare-drum inspiration (I am sure all the old-school fans will get what I am saying here). Again, the guitar solo comes to change things a bit by adding some melody in this faster headbanger and it works like a charm; just headbang and take a breather before getting back at it again.

“Killing Machine” quickly became a favorite of mine, even though it strays a bit from the Thrash path; there are more melodies here and Phil sounds like he tried a couple of new things with his vocals. The results is another classic SACRED REICH song lyric-wise but with some new ideas that, to me, are translated into a band being inspired in the studio. This falls in line with what I meant when I said this band had things to express and put out there. By the way, the lyrics talk about Johnny; is this the same guy “Who's To Blame” was talking about back in the ‘90s?

SACRED REICH have dropped a killer album with the vinyl-appropriate time duration of around half an hour. There is no weak song here and, in fact, the band chose to drop the curtain with the amazing “Something To Believe” with the most catchy chorus of the tracklist. The song is hard rocking with a bit of Southern Rock in the guitar solo and a bass sound to die for. Can we get more songs from this album in the upcoming tour, please?