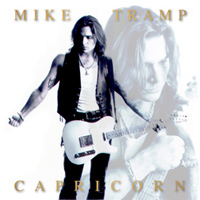 20-something years after its original release, Mike Tramp’s first solo album “Capricorn” is being re-issued through Target. And for sure it is a fantastic way to celebrate a great record that has been hard to get lately. At a first glance, this record was too soft for my taste. Something I say about every Mike Tramp release, but as it spins, details start to crystalize. There are layers of music to discover and the balance between the instruments are fantastic. Musically, it differs from what Mike did prior to this, with melodic WHITE LION and grungy FREAK OF NATURE. This is yet another style and this too suites Mike’s characteristic voice perfectly. And after getting around the album, everything is actually not all that soft.

Opening “Already Gone” is grand with the organ backing it up which gives it all depth and drive. Hard Rockin’ “If I Live Tomorrow” which follows is lighter but still holds a lot if fines. The open riffs behind the verse vocal lines make Mike’s voice come forward. His voice is the reason for checking this one out in the first place as well. He sounds as good here as usual but there’s some tension in his voice when compared to earlier releases and it took a while to get used to. Something that becomes very prominent in mellow “Have You Ever”. Especially this one feels extra emotional and personal. And if there’s one thing Mike Tramp is good is to load the vocal lines with emotion and it sounds fantastic. My favourite from “Capricorn” is “Better Off” though because if it is something sounding even better than the ballads it is the moody tracks. Again, the organ creates a dark and heavy feel. The song has a very nice beat to it and a sticky chorus line. “Running Out Of Life” has a bit of a Southern Rock feel to it and picks up in pace to the chorus. Thinking about it, this album is actually not all that soft. This in particular is a tough rocker. “Wait Not For Me” and “Love Will Come And Go” are softer though but with the great song-writing and musical arrangement behind them they remain interesting spin after spin.

One quite odd track on “Capricorn” is “Fears Of Yesterday”; the vocal line stands out and if it had been recorded by a Metal band it would have definitely been called Progressive or epic. The very clean and neat verses breaks nice towards the quite dirty feel in the chorus. The shift between acoustic and electric works fine and sets this as another favourite.

Yes, “Capricorn” has definitely stood the test of time. It is a record that grows spin after spin. Ok, I didn’t get it when it originally was released but for the years its been in my possession it has only gotten better.

Mike Tramp - Stray Away From The Flock