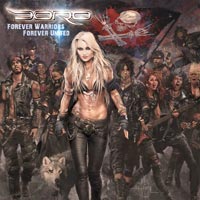 Six years is too much time, especially for a super active band like DORO that is constantly touring on every continent. No matter what people think, Doro has been a stable force in Metal and one of the few musicians who put the fans first before anything else. I guess, it is the old-school spirit that is still shining through her never-aging voice and on-stage presence. Finally, Doro found the right amount of time from touring to put on record the material she had been gathering. The result is a double studio album packed with music and a heavy dedication on top of it. You see, “Forever Warriors, Forever United” contains a song dedicated to the one and only Lemmy, and it would be beyond being silly to believe that this was done as a marketing move... If you think so, then you should do some serious studying of Metal history and - trust me - your way of thinking will change.

Bearing such an emotional load, the album has quite a few ballads which although fall into Doro’s trademark power-ballads sound, they are a bit more pouring-my-heart out. Before going that far, I have to say that the first disc opens with “All For Metal” that I am sure comes as being cheesy for many. The title kind of points to that direction but in reality it is the true definition of Doro as a person and of her band that seems to share the same dedicated-to-the-fans mentality. Yes, it is all for Metal in a fists-in-the-air rhythm, a chanting along chorus and in-your-face guitar leads. In other words, this is a genuine ‘80s Metal anthem, strong enough to bring together the voices of all the different people who have found a place to belong in. “Bastardos” put the pedal to the Metal and addresses the younger generations, urging them to not give up and keep fighting, while staying true to our beliefs. It is strange to note that songs like this one made my blood boil when I was a teenager because they made me feel part of a special league of people, but nowadays do exactly the same thing for different reasons (I hope everyone thinks that the young generation should keep the spirit alive and keep fighting). Anyways, this is neither the time nor the place to expand on this, but it is representative of how this music still works.

The first disc keeps changing the mood between fast and power-ballad songs, and even though this kind of disrupts the listening flow, it stays strong in creating feelings and pushing different buttons each time. “Turn It Up” and “Blood, Sweat And Rock 'n' Roll” will throw you back to the WARLOCK days with a Hard rockin’ rhythm and, especially in the latter, absolutely killer guitar leads. I think that giving the guitars a louder voice is the major change when one compares this album with previous DORO ones. Maybe the time spent playing the WARLOCK songs had a positive affect in Doro’s music-writing hand. Although I am not a fan of cover songs and especially in double LPs, I have to admit that what DORO did on “Don't Break My Heart Again” totally works. Yeah, Doro’s timbre shares the same depth with Mr. Coverdale but I should give credits to the music with the foot-taping groove and on-the-point guitars. In the same groovy / Friday night out direction goes the Hard rockin’ “Backstage To Heaven” that changes the mood (there is some saxophone action there too) after the double power-ballad treat of “Love’s Gone To Hell” and “Freunde Fürs Leben”. You wouldn’t need to twist my arm, for me to choose which of the two I like the most; of course I’d go with the latter, since the German lyrics in a power-ballad is one of the strongest assets of DORO.

The second disc opens like the first one; “Résistance” comes with a strong groove and a catchy chorus which sounds better with the French accent, but I cannot pinpoint the reason why. This disc features more power-ballads than the first and for this feels more personal. However, there are still some songs able to shift the mood like the ZZ TOP-esque “Love Is The Sin” with a night-driving groove and lyrics straight from an ‘80s movie - absolutely awesome. One of the most [sic] Lemmy songs is “Living Life To The Fullest” and if you listen carefully to the lyrics-from-the-heart, you’ll get this. “Fight Through The Fire” maybe the odd one out as it sounds a tad more modern compared to the ‘80s atmosphere of the rest of tracklist. Since this album is emotionally connected to Lemmy, a MOTÖRHEAD cover makes sense, and “Lost In The Ozone” was picked instead of one of the usual suspects, and for this it deserves more credit.

There you have a double-LP treat from the only Metal Queen who is still at the trenches producing music and touring as much as it is humanly possible. Even though this an ‘80s album, it requires more listening time to grow inside and appreciate. But, wait a minute, isn’t this the purpose of music to spend more time listening and grow together? Of course it is, and this is also the reason why ‘80s Metal will never die!