Alastor - Slave To The Grave 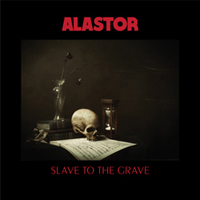 I hadn’t the slightest idea of Sweden’s ALASTOR’s existence, but after recently bumping into one of RidingEasy Records’ press releases regarding the Greek quartet BUS THE UNKNOWN SECRETARY (aka BUS) – ok, that’s a different story – I was excited to discover the magical and mysterious Doom world of ALASTOR. And in in full disclosure, I’m so glad I did. You may already thinking “not another SABBATH-y infused band!” but let me tell you that this is not the case here – well, not exactly at least. So, fasten your seat belt and let’s dive head first into ALASTOR’s debut full length, “Slave To The Grave”. Ready?

As you’ve probably guessed by reading the album’s title, this release is all about the concept of death. And even though I didn’t understand a word from album opener “I Döden Är Vi Alla Lika” (which translates into “In Death We Are All Equal”), the sound of thunder and church bells underline that things are about to get really serious. The following 10-minute “Your Lives Are Worthless” (I know, pretty gloomy, right?) hits the speakers carrying a familiar ELECTRIC WIZARD-laden flair, and the moment Dharma Gheddon’s vocals enter the room in an echo-y, murky way, you’d feel like you’ve just discovered the evolution of the Doom Godfathers BLACK SABBATH, and rightfully so; the slamming power chords, the thundering drumming and the mean-business down-tuned bass throw all the hooks right there, and prove that once again the Swedes know how to do things better, pushing the final result to its fullest capacity. Of course, the musical goodness doesn’t stop here; “Drawn To The Abyss” and my personal favorite “N.W 588” feel like they have escaped from the first two UNCLE ACID AND THE DEADBEATS’ albums, applying strong candidacy for containing the most catchy riff of the year, while Dharma’s haunting, hazy reading fits both compositions like a glove to a bare, scraggy hand.

But how ALASTOR have managed to avoid the “one more SABBATH clone” trap? Well, it’s because of tracks like the ANCIENT VVISDOM-esque acoustic “Gone”, or the closing, 17-minute haunting galore titled “The Spider Of My Love” that really steals the limelight from every other track here, no matter how catchy, warm or fuzzy tend to sound. The JEX THOTH-infused aesthetics of the latter one, combined with its steady, mammoth-like riffage (it’s all about the Riff here) and Dharma’s almost-funereal singing, seal the deal with a bang, leaving the best of impressions for an even grandiose continuation.

There isn’t much to be added here; in an oversaturated scene that nowadays suffers from the epidemic of constant repetition, ALASTOR’s Heavy Doom Rock served in “Slave To The Grave” feels like a breath of fresh air, drenched in heavy darkness and steeped in Occult horror, able to make your skin crawl and ears cry sweet tears of blood. If you’d ask me, Death has never sounded so ravishing before. And certain. Don’t leave this lil’ gem go unnoticed.