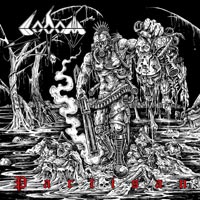 Unbeknownst to me that SODOM had a brand new lineup, I started listening to the “Partisan” EP, being excited getting new music from this reliable Thrash band. Yeah, there is a new lineup behind the two brand new recordings (the third is a live one), and if you are of my age spectrum, then you may have started listening to SODOM during the “Persecution Mania” era, and that means having Mr. Frank Blackfire on the guitars. If this news did not temp you to headbang, then you have missed the German Thrash train all together, so you better do some homework.

And it is not only this, because the German band has returned as a four piece, something that has happened only once in SODOM history, going all the way back to another teenage favorite (of mine), “Better Off Dead”.  With two guitars and Tom’s trademark timbre, SODOM will storm your PA system with an old-school sound that rides on the opening riff of “Partisan”. I hate to make comparisons, but spinning this one, I could not help but think of the massive sound “Agent Orange” delivered some decades ago. I have no idea whether this is due to Frank’s return and, to be honest, I could not care less since the song is a headbanging galore. On the other hand, this can be a strong indication of what SODOM are working on in the studio, and this is another reason to be excited. From the press release, I learned that “Conflagration” was penned by Yorck Segatz who, despite being a new addition to the lineup, sounds fully familiar with the old SODOM. Yeah, this one flirts with the “Obsessed By Cruelty” days, being rawer than the previous one, assaulting your eardrums with that sweet Punk-esque rhythm section and the echo effect on Tom’s singing which is nostalgia 101. Brace yourself for the fast break following the mid-tempo groovy section (pay close attention to the bass leads) which is high-octane fuel for the moshing machine.

The tracklist has one live recording which I believe captures the brutality this band brings from the stage, making me feel nostalgic at the same time, considering how many years (or decades) that have passed since my last SODOM concert. Isn’t about time for SODOM to cross the Atlantic? At any rate, “Partisan” is a bearer of great news, strongly hinting that the Germans have something great brewing in the studio.