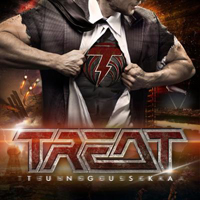 Back in the day, when almost everything in Heavy Metal and Hard Rock was fairly new to me, a friend lent me “Scratch And Bite” and since then, I've been hooked on TREAT for life. Sure, some time there in the early '90s, their style wasn't really what I proclaimed to be as my favorite, but I’ve never stopped listening to them.

This made “Tunguska” a highly anticipated release... With a slight hesitation though, as I don't think “Ghost Of Graceland” is as good as “Coupé De Grace”, it feels a little safe in comparison, actually towards the whole back catalogue. But it was a pleasure to dig into “Tunguska”; the energy is there and it holds strong and inspired choruses and melodies, just as it should be in shows opening with “Progenitors”. A track that's both hard and heavy in TREAT measures. “Always Have, Always Will” brings the '80s back with a good chorus and more traditional Hard Rock sound. Dark “Best Of Enemies” stands out with a nice groove and moody vibe. The beat and kind of storytelling feel in the vocal lines create a musical feel. But with the strong chorus, I can see this one as a very good live-track. The ingredients in “Rose Of Jericho” are basically the same as well but the songs sound very different. And that’s the thing; the sound of the album is consistent but it still holds great variation, nuances and a whole lot of fines.

“Tunguska” is a modern sounding record and the production is grand. It feels very commercial and almost Pop-oriented on occasion though which makes me wish for a more organic sound here and there. But it’s no doubt about it, it all sounds very good. One song that struck me immediately was “Creeps”, a sticky melody and quite odd rhythm and of course another fantastic vocal line from Robert Ernlund. It has that kind of Swedish '80s Pop feel to it and is quite cheesy really but I sure like it. Another one that got to me at the first spin was the ballad, “Tomorrow Never Comes”. It’s not very common these days that a band includes ballads on their records, and when they do it’s definitely not with the same nerve as the massive MTV-hits from the Hair Metal days but this is a full on. It’s also fascinating that the neatest song on the album features the roughest and least processed vocal efforts. That tiny filth that comes in is what makes it so good.

“Tunguska” is darker than TREAT usually are but the style suites them and it all sounds fantastic. I could have taken a little less polished sound and more of a Rock ’n’ Roll vibe to it all. It’s petty though to point out that the production is too good. The modern production is a matter of taste of course. It’s the music that matters and the songs are there and as a whole it is a solid album.