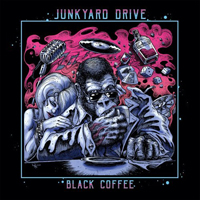 The Danish youngsters of JUNKYARD DRIVE are going from clarity to clarity. Their debut “Sin And Tonic” was a fresh breeze when it was released in 2017 and the guys have always impressed when I've seen them live. Brand new “Black Coffee” continues down the same path with the debut, but just as each and every show has become tighter and more dynamic, the same is happening with the record.

After the acoustic guitar and mellow intro of album-opener “Time Is Over”, an up-tempo trademark JUNKYARD DRIVE song shows up with a sticky chorus-line, easy to sing along to; the softer, as well as first single “Sweet Little Dreamer”. The song was conveniently released just hours before the band's successful performance at the massive ‘Sweden Rock Festival’. It was well received then, and continues down the same path as the opener. But the grand sound puts this song in the MTV glory-days when Hair Metal ruled. There's nothing new about this, but it surely is a good song.

Filthy up-tempo “Sucker For Love” is one of my favourites from the album; the rough and edgy riff kicking it off matches well with the more floating bridge and it is damn cool that the music stops in the chorus. The dynamics become fantastic with this. “Way Too Long” is another piece of music that stands out from “Black Coffee” and not just because it's a ballad with just guitars and vocals; it's because it’s a fantastic track. It has the melancholy and sing-a-long potential of the D.A.D hit “A Laugh And A Half” and vocalist Kris nails the emotion and nerve perfected by fellow Danish rockstar Mike Tramp.

At first, I thought it was odd to follow-up “Way Too Long” with “Through The Door” as they are very similar initially. But then, the latter turns into a really Heavy and moody piece of music, more of a Power Ballad if you will. This one shows that the fines and nerve wasn't a one-time thing in “Way Too Long”. The snappy “Wasted Nights” should work well in a live-situation to shake the crowd up a bit. Again, it has a good chorus line that should lure the crowd to sing, it's quite long though. It's great to see that it's possible to create a catchy chorus without just repeating the title.

The wrap-up of “Black Coffee” comes with “Where I Belong” which (without digging into the lyrics) feels suitable, this is where JUNKYARD DRIVE comes to its rights, it is this they shall do, where they belong. And what could be better than to end the album with a song titled “See You Next Time”? I sure will be waiting for them at least.