Suicidal Tendencies - Still Cyco Punk After All These Years 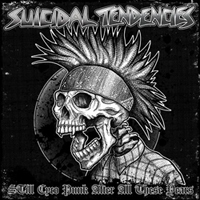 There are bands which, as years go by, they get soft(er) and maybe a little bit too professional, meaning that they know what to do and what to say to look like nothing has changed (yeah, right). Well, the seasoned metalhead (hopefully) knows when to call bullshit and there are quite a few bands out there that have become performers of their own music. So, reading the title of the new SUICIDAL TENDENCIES LP stating “Still Cyco Punk After All These Years” can make the ‘bullshit’ sensor to go off, simply because it is impossible to believe a band formed in the ‘80s to be cyco, especially when considering Mike Muir’s age. But hold on a minute; isn’t this the band that has been storming the stages all around the world, sweating their arses off from the first all the way to the last minute of the set? You bet it is, so you better take the album’s title at face value, put on your S/T t-shirt and get ready to keep up with Mike because he has a tank full of gas and he’s ready to floor the gas pedal... Ready or not, here it goes!

You can never go wrong with a trademark Hardcore / Crossover intro, with the drums and the bass kicking in on “I Love Destruction”. Add to this, Mike’s ageless full of irony vocals and Dean Pleasant’s full of Punk attitude guitar chords, and you have a(nother) high octane SUICIDAL TENDENCIES LP, made of the same stuff “Join The Army” was, three decades ago. I know, it is hard to believe that this band shares the same craziness after all these years, but man, the moment the vinyl starts spinning, your blood starts boiling inside, turning you into a teenager (only if you are passed your prime…) Can you stand still as the bass doodles its way in the vein popping “F.U.B.A.R.” (there are lots of people in the state the title implies) or resist singing / screaming along “Sippin' From The Insanitea” (I just love how Mike invents new words with a deeper meaning), and seek for the closest mosh-pit to throw yourself into? The massive drum explosion on the latter is one of the reasons I got so excited when I saw Dave Lombardo thrashin’ his kit when sharing the stage with the other bro-Cycos. Everything sounds in place here with the energy levels constantly on the red, and I already get goosebumps when thinking how these tunes will do on a concert setting. In case you are one of those hard-to-convince metalheads, then let me put your mind at ease and say this album (along with this band) is probably heavier than lots of Metal LPs out there; the combination of flaming lyrics, explosive guitars and moshing-around drums and bass as proudly delivered in the dynamite track “Lost My Brain… Once Again” (is this a nod to the second song of “Lights...Camera...Revolution”?) make a killer combination with the Punk-infused “Nothin’ To Lose” where the double bass drum screams ‘Lombardo’ on top of its lungs.

It may sound strange to some, but one of the things that have made proud a S/T fan is Mike’s lyrics, which are written in a shocking simplicity and therefore make totally sense by aiming at your heart and mind. This goes hand-in-hand with his way of preaching when he is on stage, trying to squeeze decades’ worth of advice that many of us would love to get when we were younger. The mentality of keeping your head high no matter what, and being confident to speak your word and think with your own mind is stronger than ever. Yeah, crank the volume all the way to ten and join singing in “Gonna Be Alright” and “Ain't Gonna Get Me” and keep in mind to also pay attention to the lyrics once your sweat has been dried off. Despite being the last song of the album, “Save A Peace For Me” hit me the hardest and I will blame the combination of the amazing guitar riffs (love how the bass takes over the wheel in the calmer break) and - what else? - Mike’s burning singing. Pay close attention to how this song climaxes in the end and join me wishing that S/T will add it to the set. Did I mention how killer the double bass drum sounds?

The vinyl edition of the album is on its way, so soon I will be able to read the lyrics line by line and prep myself to join the S/T army on concerts nearby. I could not be happier seeing SUICIDAL TENDENCIES sounding this strong, anno 2018, with a bunch of songs that would wake up minds in these social media-infested days where all that matters is getting that ‘like’ or this ‘share’, being online connected but getting more and more disconnected. The answer to my question whether a band can be Cyco after all these years is a powerful ‘no’, simply because only SUICIDAL TENDENCIES can do this! S/T for life!

PS: This album is basically a remake of Mike Muir's debut solo effort from 1995 and since that completely missed me I consider this one as a brand new LP.