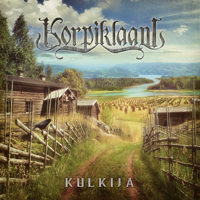 After “Manala”, KORPIKLAANI changed the album-releasing cycle into one per three years, and right on time, “Kulkija” will hit the stores, being one of the longest records the Finns have ever created. Aside from the time duration, “Kulkija” seems to be a curving point in KORPIKLAANI’s song-writing and it may as well be a way to re-introduce the band. One - most probably subtle or even irrelevant - change is the absence of the antlers-wearing figure on the album’s cover artwork which to my eyes points to the band’s first albums in a ‘going back to the basics’ way. However, having in mind that KORPIKLAANI is not a band eager to make grave changes, I had to proceed with caution with “Kulkija” streaming.

After all, “Neito” opens the album with all the trademark elements the Finns are using in their music; the dancing-along tempo, Jonne’s distinct timbre and the Folk-infused Metal that is impossible to resist during a concert. Yeah, I can already imagine non-Finnish speaking fans lip-singing along and getting the dancing mood on, once KORPIKLAANI have hit the stage. Accordion is a difficult instrument to have on a Metal album, but this band is one of the few that can manage to pull it through. One thing that the nitpicking ear will pick is the album’s production which has given the music room to breathe, steering away from the super-compressed mixes that melt all the instruments into one… Ok, I am exaggerating here but I am sure you have caught my drift. This is highlighted in the beautiful collection of mid-tempo melodies grouped under the title “Korpikuusen Kyynel”. Yeah, this is ‘sounding natural 101’ with the focus being on capturing the voice of the violin and the accordion and properly paring them with Metal. Despite the mood-lifting groove, there is an underlying nostalgia feeding of the accordion and the - always - reminiscent of the SKYCLAD violin. One can translate this nostalgia as KORPIKLAANI sounding more serious and less playful as compared to the previous studio doings. Listen closely to the melancholy the violin is serving on “Harmaja” and how this fits Jonne’s lower register singing, and then let your dancing side blow some steam off with “Kotikonnut” where the distorted guitars have taken a couple of steps forward in the mix. Speaking of heavier songs, “Kallon Malja” will fit the profile and here you just have to love the bass’ stronger presence on the mix and the almost galloping rhythm guitars on the longest song KORPIKLAANI have put out. I have no problem with the short and dancing songs but it’s the longer ones that give the appropriate space for the songwriting to evolve and touch upon different moods. The bass keeps a high spot on the mix in “Sillanrakentaja” where the mid-tempo and the ‘a bit more’ aggressive singing make this one the heaviest of the tracklist, and I would go as far and say that this one is flirting with Doom.

In case I have frightened you that there are no dancing your arse off songs here, then rest your mind with “Kuin Korpi Nukkuva” (still a heavy one) and the violin-driven “Joumamaa”. Still, it was “Tuttu On Tie” that captured my interest after my sweat-from-dancing had dried off. Once again, the slow and melancholic melodies feed the Folk side of KORPIKLAANI in the way that I like more than the up-tempo tunes. This type of music fits better Jonne’s story-telling singing and showcases the band’s deeper depth when it comes to more complicated song-structures. And this is a side that had been fading away under the weight of putting together drinking songs.

I happen to report and hear KORPIKLAANI stirring the pot by trying different ingredients without deviating much from the path they have carved more than a decade ago. The natural sound combined with the more complex songs have contributed in creating an album that will stand above than the recent KORPIKLAANI discography. Pack your bags because there is a long trip ahead of you - are you ready to join?