DevilDriver - Outlaws 'Til the End, Vol. 1 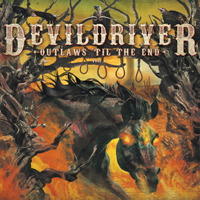 It is rather easy to make an album full of covers and I am sure some will add the word ‘lazy’ to this description. Yeah, recording covers is part of having fun and - in theory - should not be taken seriously. However, when a band puts some serious effort on it and filters the songs through its own personal sound and style, then you’ve got something that’s worth spinning more than for ‘just checkin’ out’. This is exactly the case with DEVILDRIVER’s take on Country with “Outlaws ‘Til the End, Vol. 1” featuring ten covers of... Yeah, you guessed right, Country tunes. I would have add the adjective “well-known” tunes but that would have been insincere since my relation to this genre is on a ‘I’ve heard that somewhere’ basis.

You do not take to dig deep on this album as the tracklist opener “Country Heroes” quickly spills the beans, stating that DEVILDRIVER did not just cover the songs. No, we are talking about a full-overhaul with the new versions holding all the things fans like in this in-your-face and pissed-off band. After the misleading clean guitar intro, “Country Heroes” kicks the door down with the massive guitar-driven rhythm section and Dez’s vein-popping growling which screams DEVILDRIVER from miles away. If you are oblivious to who Hank Williams III (who is guest-singing here) is, then a simple YouTube search will convince you that this version of “Country Heroes” is headbanging and moshing worthy stuff with only the lyrics and a couple of guitar licks revealing the connection between the original and the cover. Yep, this was my first time I had the urge to headbanging listening to a Country song. But that was not the heaviest tune of this album, as “Whiskey River” holds the scepter for the meanest recording of them all. Oh my, the tempo flirts with blast-beat speeds with guitars (still) holding the DEVILDRIVER banner high, grinning at the Willie Nelson’s original that wears cowboy boots and hat, sounding smooth as a horse ride towards the sunset. Nope, there are no sunsets here and no heartbreaking tunes, but brutal headbanging fun with the ferocity one would expect from DEVILDRIVER to get the blood boiling on a concert setting.

Ok, “Ghost Riders In The Sky” with the very interesting guests (check the list above) is probably the easiest tune to recognize, and maybe the softer cover with the guitar slide and the “Yippie yi ooohhh” lines to highlight this. The ‘being heartbroken’ side of Country is being (almost) served with the “If Drinking Don’t Kill Me (Her Memory Will)” cover. Once again, there is minimal connection with the original (you just have to check it out though) but the despair mixed with anger singing by Dez and the DEVILDRIVER-trademark riffs will give you a run for your money and keep your appetite for moshing going stronger than the nastiest moonshine.

In the melodic side of things there is the moody “A Thousand Miles From Nowhere” with the slide-guitar action and the groovy “Copperhead Road” which is on top of this is  super-inviting to sing-along, so you better have that Country voice ready... Burton C. Bell pairs up with Dez in the ass-kicking version of “Dad’s Gonna Kill Me” which shows all the colors of DEVILDRIVER from the hearty double-bass drumming to the awesome guitar riffs in a “Clouds Over California” way.

I will admit it; DEVILDRIVER caught me off-guard with this album that although is full with covers, sounds inspired as it is packed with setlist-worthy material that may introduce Country to some metalheads... Ok, I am overstretching this as I am almost certain that those metalheads will just check the originals only to appreciate even more what DEVILDRIVER have done here. Absolutely recommended!

DevilDriver @ The Forge, Joliet (US)