At The Gates - To Drink From The Night Itself 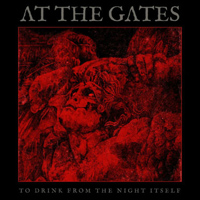 “At War With Reality” marked the returned of AT THE GATES and this was great news from the get-go. And it is totally understandable that it was also an album that had to hit all the right spots as it had to re-introduce the band to a brand new audience. In hindsight, I think that album was made following a specific recipe and for this, had a squeaky-clean production, so after the initial enthusiasm of having the Swedes back, the LP faded away. Having this mind, one should understand how crucial “To Drink From The Night Itself” is; will AT THE GATES follow the classic recipe? Will this be another day at the office? Add to this, the departure of Anders Björler and you have a nice riddle to solve with the only thing left to do is drop the needle on the wax...

The down-tuned clean guitar of “Der Widerstand” opens the album and the door for the darkness to creep in hinting that this will not be a happy album, and you will feel this the moment the orchestration kicks in. Yeah, I can definitely see this being the way to start an AT THE GATES show. And then it hits you; the title track carries the Gothenburg sound in all its glory with the main riff setting the headbanging mood on the spot. This may seem the classic AT THE GATES but leaving on the side all the enthusiasm, the rawness of the sound shows its worth. The production sounds dirtier and to my mind closer to the older AT THE GATES. Enjoy Tomas growling preaching, the awesome guitar distortion and the live drum sound with the hi-hat being the icing on the cake. As far as I am concerned, the departure of Anders did not have any negative impact on the band and, in fact, this change may have injected some fresh blood in the band’s music-writing veins. After all, this is pretty much the same lineup that formed THE LURKING FEAR and this means that these guys are hungry to write new music and play it live. Digging deeper, I realized that this album is closer to the early Gothenburg sound with the riff melodies staying behind the aggressive rhythm section and the growling vocals that justify the Death Metal side of the Melodic Death Metal genre of the Swedish origin. You can see this happening in “Palace Of The Lepers” with the melodies being pushed on the side by the fast snare drum and Tomas’ deep growling where you can still understand the lyrics that - believe it or not - are so inviting to grunt along... Somewhere in the middle, the song picks up the pace (follow the snare-drum for this) but without dismissing the melodic side and this showcases a better balanced album when compared with “At War With Reality”.

The ‘being inspired’ aspect of AT THE GATES is highlighted with the dark “Daggers Of Black Haze” (what a sweet bass sound that is), the SLAYER-esque (of their “Diabolus In Musica” era) and the amazing “The Mirror Black” that carries a bunch of new ideas. The mid-tempo of the latter song makes it sound ten times heavier and has a dramatic atmosphere that feels so fitting for AT THE GATES. You may think of DARK TRANQUILLITY to get an idea of what dramatic means and the way the string orchestrations work here. That closing part, combined with Tomas’ voice, will give you the creeps being the perfect representation of how dark this album is. By the way, the female choirs close to the end kind of lead back to the beginning of the album and - trust me - you will keep listening.

Sometimes a ‘reset’ or even a shock is all a band needs to get a fresh start and discard all the cowebs gathered from the relentless touring / releasing album cycles. AT THE GATES sound more like AT THE GATES in “To Drink From The Night Itself” and with some added new ideas that I am already excited to see how they will evolve. In the meantime, let us enjoy this solid album that will get ten times better served straight from the stage!

PS: See if you can resist throwing yourself into the mosh-pit after Tomas’ grunt and the riff attack of “A State Bound In Stone”.

At The Gates - Adrian Erlandsson

At The Gates @ House Of Blues, Chicago (US)

At The Gates - Anders Björler