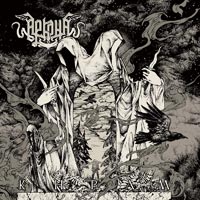 The change in ARKONA’s music is in plain sight and it does not take much effort to take notice. Just have a (literally) look at the band’s discography to realize that the cover artwork of “Khram” is in black and white whereas the rest are fully colored. Usually, an album’s cover artwork is in some way connected with the lyrics, but in this case, it is also connected with the music and the overall haunting atmosphere. Yeah, the Russians have put a strong footing on new grounds and are bold enough to do so with long in time duration songs, so the only question waiting for an answer is; are you onboard this spine-chilling journey?

The album lifts the dark veil (or does it try to cover everything with it?) with a chanting that comes from your darkest nightmares. Masha is invoking Mara to get everyone into listening the new ARKONA in a chanting rhythm and then the primitive instruments touch upon the Folk sound. Yeah, the Folk elements are still here but ARKONA have pushed their sound back into the past when Black Metal was starting to adopt all these non-Metal instruments in a raw and aggressive way; in simple terms, it was when this music type was called Pagan Metal. However, ARKONA have done this without abandoning the complexity in their music, and you can hear this in the aggressive BATHORY-sounding “Shtorm”. Note how the guitar layers build upon the double bass drumming and Masha’s raw vocals before the flute melodies justify the Pagan roots. Does this sound overloaded or too complicated? Well, it does but not in an overwhelming way; you just need to get off the Folk Metal mood you had in mind before checking ARKONA’s new record.

After having your ears primed by the aggressive opener, your mind has matured enough to dive headfirst into the blackness “Tseluya Zhizn'” is offering. The mid-tempo rhythm and Masha’s melodic singing are full of melancholy and despair (especially during the screaming) with a pounding groove and some subtle keyboard melodies that will crawl under your skin. The melodic break after the first five minutes is simply amazing and a perfect representation of the depth ARKONA have put in their songwriting. The electronic sounds combined with the children’s choir-esque singing create an amazing ambience, which soon meets the Pagan Metal we’ve learned to love from the Russians. Of course, this is just the-calm-before-the-storm since it does not take long for the guitar distortion and the screams to open wide the doors and invite a long soloing part during which the violin, the guitar and the bass take turns into the spotlight. And there you have it; seventeen minutes gone by without even taking notice but with tasting a wide spectrum of feelings, tempo changes and atmospheres that will make you want more. And there is more from where that came from; “Rebionok Bez Imeni” will keep your ears nailed to hear what ARKONA have infused in its twelve minutes. This is atmospheric Black Metal with an amazing mix where the bass has its own voice that is as loud as it should during the opening “credits”. I got some IN THE WOODS goosebumps during this song’s first minutes; at least, until Masha’s characteristic clean singing where the Russian language fits perfectly to the music (lets not forget that the voice is also a musical instrument). Yes, the harsh-sounding pronunciation is a tailored suit to the Black Metal ARKONA are delivering in this opus. The song’s second half speeds things up and it is headbanging time the moment the awesome guitar riff takes the lead into the mix.

The tracklist features a cover on VEDAN KOLOD’s “Volchitsa” which has gone through a total makeover, so you should (also) check the original just to see how ARKONA have evolved the main melody and how many elements have been added. Oh my, the almost blast-beat climax around the middle of the song has gone completely off-script as far as following the original’s structure is concerned. Again, the progressive appetite or tendency (if you prefer) in ARKONA’s songwriting hand becomes evident and it is most entertaining to follow the music to all the genres it touches upon. Did I mention the piano-sounding keyboards opening “V Ladonyah Bogov” and the bizarre almost out-of-tune guitars that paint everything with the blackest of colors? Oh hell, you have to open that Pandora’s Box on your own...

With all the confidence I have gathered by following this band for more than three albums, I can safely say that “Khram” marks ARKONA’s best creation. The album’s musical bearing can lead the way towards unexplored Metal territories and that says a lot if you consider the motto “everything has been played and written in music” some of us occasionally bring to mind. I hope that I will soon get a chance to hear how this album behaves onstage.