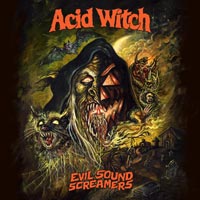 Of course and I completely missed the target with ACID WITCH’s new record “Evil Sound Screamers”, simply because Halloween ‘17 has long gone passed. However, I will get a second chance this year, so I can also claim that I am just ahead of time... Regardless of the intent hidden into the release date (it was October 31st, by the way), “Evil Sound Screamers” is the perfect soundtrack for those who like to get spooked in the old-school way; cheap visual effects, lots of atmosphere and naïve scripts which are able to haunt our night-dreaming. Add on this, Doom / Sludge aesthetics and you are spot on with this vinyl-friendly release, clocking a bit less than 40 minutes. Are you ready for some trick or treating?

There is no way to miss the Horror movie '70s aesthetics with the atmospheric shivers-down-your-spine intro “Scare Tape” which is basically a twisted version of a survival guide for trick or treating... And then, the scary door opens the hard-hitting mid-tempo “Mr. Beistle” that mixes Sludge / Doom with some King Diamond-type multi-character singing. The keyboards carry the Horror aesthetics with pride while the heavy-footing of the bone-crushing distorted bass sound will satisfy your Sludge cravings. The '80s synthwave sounds and loops will make you drop your guard down and leave you ill-prepared for the fantastic early-ROTTING CHRIST guitar riff that follows which goes hand-in-hand with the growl “I hate Halloween”. By the way, I love the muddy production and the raw sound that sounds like it was recorded in one take. “Nain Rouge (The Red Dwarf)” starts like a Horror movie trailer straight from the '70s (again) before hitting harder with the hearty drum sound, nightmarish growling vocals and an awesome guitar sound. I love it when ACID WITCH slow down the tempo making everything sound 666 times heavier as it happens in the super-evil “Mutilation Mansion” (what would you expect with such title?). And then, there is the “Twilight Zone”-spoken intro for “Hardrock Halloween” which - believe it or not - is groovy as hell... You can almost taste the Hard Rock rhythm being well-hidden behind the guttural singing and the massive rhythm section. I know that Hard Rock does not fit the ACID WITCH profile but in a bizarre and sick way it does (yeah, the guitar solo has the same feel too). This amazing Halloween soundtrack ends the film screening with the amazing “An Evil Sound Screaming” and I want you to start thinking how the Doom tempos match the “Exorcist” main theme before letting your shocks been blown off by the actual thing...

I enjoyed each and every listening of this record, and trust me, it does not matter what time of the year is; “Evil Sound Screamers” will send massive shivers down your spine and then make you crave for more, so be ready to flip the vinyl quite a lot and remember to blast this during the entire trick or treat festivities to make sure no one will man up to knock on your door...